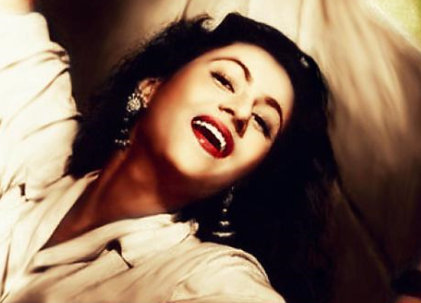 A peerless beauty conceived and nourished in tragedies, Madhubala’s onscreen and off screen persona has been often compared to that of the legendary Marilyn Monroe. The world finds a certain similarity in the way their tresses fell on their forehead.

It’s tough to take the character out of the protagonist – that’s the beauty of an actor. Not many have it in them. And when it is about a female leading role, that part becomes slightly more tough.

Back in time, when all that a charming lass did, was chirp happily around the bushes, Madhubala took her skill seriously.She was one rare artiste who understood expressions like the back of her hand. Call it the ill fate of time itself, the industry was so into her appearance that it failed to see her potential.

With her heart and soul into cinematic pursuits, Madhubala dotingly entangled the entire industry in her lovely locks and wondrous eyes. A complete feminine charm radiated from every on-screen move that she made. Madhubala was drenched in a Piscean glory from head to toe. but never shied from the industry which all about humor and entertainment.

Everything about her was dream-like. An icon of sensuality, even her tresses could hypnotise the onlookers, playing a Trans on their senses. No doubt then she was admired as ‘Venus of the Screen’ – the metaphor totally matched her ability to blind anyone in a sparkling moment of cinematic endeavours.

A peerless beauty conceived and nourished in tragedies, Madhubala’s onscreen and off screen persona has been often compared to that of the legendry Marilyn Monroe. The world finds a certain similarity in the way their tresses fell on their forehead. And of course, by the smile that never failed to find its way even amidst the most chaotic inner turmoil. Made immortal by sheer elegance, the leading ladies are today celebrated as a symbol of strength, outlandish lives, and amour ahead of its time. Strange, that the love-lit diva suffered tumultuous blows in her love life. Her youth was a epitome of an overwhelming love sagas, with abundant romance but never an ever-lasting one. Her personal life was a reverse image of her professional life – the latter was an all time high and the former was doomed to heartbreaks. A love less marriage, however, did not mean a life devoid of passion. Her short-lived affairs were close to the heart of those whom she shared a poignant camaraderie with. A cheerless life reared a poet within her. Like many pondering, lost souls Madhubala too maintained a chronicle of a marooned verve. A Madhubala unknown to the world revelled in those writings.

Like a brave-heart she danced to the lyrics of ‘Jab Pyaar Kiya to Darna Kya’. Just like her doomed relations, as if cursed by black-magic, her stint with life came to a tragic end at an early age. ‘Maut wahii jo duniyaan dekhe Ghunt ghunt kar yu marnaa kyaa’ – Madhubala’s farewell was as touching as these lines from the song from a romantic narrative that the world could never do justice to.

Why Men Cheat (Booty is not the only reason)

If There Were No Goodbyes