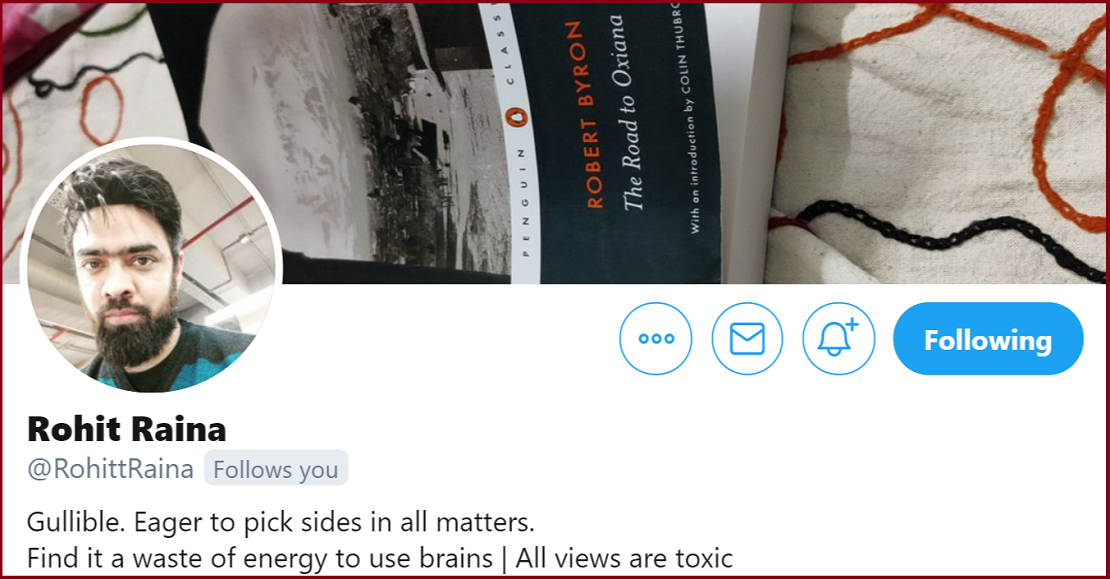 How not to be a slave to your political ideology

As I wrote in one of my earlier posts, Indians have become obsesses with picking sides in the name of ideology.

My job requires me to spend considerable amount of time on social media, mostly Twitter and Facebook. To be frank, I am in dire need of a social detox.

The sheer magnitude of bigotry, hypocrisy and lust for hate and sensationalism really gets to someone like me, who is yet to pick a side.

Sure, I agree with 60% of what good people from the Right have to say on issues as opposed to just 20$ from the Left, but that’s close enough to reassure me I am not a slave to any ideology.

Let me stop the random rambling and give you some evidence in the form of some tweets to prove why I claim to be of no specific political ideology despite being a very political individual.

Calling out trolls on the Left and Right Wing

This is what I wrote to express my disillusionment with how our illiberals have romanticized the concept of burqa – perhaps the worst thing we can perpetrate on women and fool them into believing that “it’s their choice.”

‘How ironic that we live in a world where you’re viewed as an #intellectual if u glorify & celebrate this #oppression of #women, and labelled a #fascist if you criticize it.’

Icing on the cake is, same people who glorify the suffocating burqas are the ones who would trash Karva Chauth for representing the Hindu brand f misogyny and how Hindu men control nature and women to establish their supremacy.

Here’s some fresh and authentic hypocrisy by the FeminisminIndia Twitter handle.

Here’s another tweet on a man with probably his wife or sister or just an acquaintance on a beach.

As you can clearly see, the man is evidently having a good time in his beach getup.

Meanwhile, the woman’s beach look is, well, there’re a lot of layers to sit and analyze here.

Hell, I had the highest regards for the likes of Sushant Sareen and Anand Rangnathan until they turned into cheerleaders for Kangana Ranaut.

Anyway, here’s some tweets calling our the so called nationalists.

You don’t have a clue how frustrating it is for me to see that only for the fact that Kangana Ranaut supports Modi, the entire rightwing ecosystem, including the intellectuals I have looked up to – such as Anand Rangnathan, Sushant Sareen, etc. – have forgotten all decency. Such vile, so much vilification, such misplaced anger, such blind cheer-leading behind Kangana Ranaut.

“Can all the bleeding heart nationalists and #nepotism haters #boycottBollywood silently? Nobody is going to follow in your footsteps just because you write aloud, stop thinking of yourself as some kind of a role model.”

I have serious issues with Arnab Goswami, the self-glorifying harbinger of patriotism and justice in India. Here’s a tweet on his cheap campaign going on right now.

“Can #ArnabGoswami quit already? Dude, you’ve got your year’s worth of ratings in just a couple of months. Get over it now. I’m sick and tired of your #stunningrevelations.”

Back to Calling Out Left’s Hypocrisy

It’s hilarious in a sad way that Burqa is viewed as a symbol of liberty of women by the woke leftists.

“How ironic that we live in a world where you’re viewed as an #intellectual if u glorify & celebrate this #oppression of #women, and labelled a #fascist if you criticize it.

Here’s calling out one of the elites, Raja Sen

Rhea is to the Right what Modi has always been to the Left – Guilty with zero evidence. And the likes of Raja Sen, just some basic hypocrites.

That may sound like a far-fetched equivalence, but if you think about it.

Calling out Shibani Dandekar for getting personal