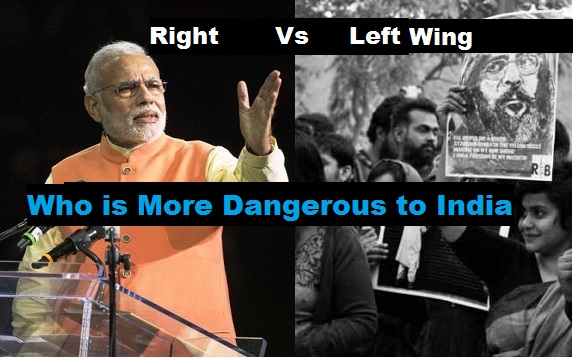 There are four kinds of people in the world:

(4) Just people; not patriots, not anti-nationals. Just your average and minding-their-own-business Joe(s).

The fourth kind doesn’t want to pick sides. But with the moral landscape of our country shrinking fast, courtesy people to the far right and left not wanting a middle ground to exist, is staying on the fence even possible? Nope, not for the keyboard-warrior me.

So what does someone like me, who does not want to pick sides but finds it hard mind his own business, think of the whole intellectuals vs saffron debate?

Left vs Right Has No Winners

They come under different labels – leftists, pseudo-intellects, liberals, human rights champions. The Left Wing in India is different from the Right Wing in ways that must make you think India is two separate nations.

The hyper-kinetic Right Wing can’t keep its freakery in check. Infested with misogynists, racists, xenophobics and bigots, it believes that even losing a Cricket match is anti-national.

The much classier, academia-dominating, and erudite left wingers is the ignorant lot, the one that wants to take on the world (by marching to India Gate every now and then) but has barely managed to come out of the cocoon it has found its comfort in. Sure, they do fight for intellectualism, decriminalization of gays, and environmentalism but I doubt if India’s liberals can claim bragging rights over much of it.

Now that we’ve moved past the obvious, surface-level facts, let’s get to the heart of the matter.

Right Wing has some hope. For starters, there are reasonable right wingers who view world from lenses not clouded by hate and prejudice. They don’t live to hate Muslims, or kill humans to protect animals, or view women as objects. How they are different from liberals is that they don’t scream human rights every time a civilian in Kashmir, trying to protect a terrorist, gets killed. They don’t scream BJP-intolerance if, like every other day in Independent India, a person from Minority is killed by crazed-out goons who are deluded by religion. Apparently, these reasonable folks are outnumbered by a much delusional, misled, proud-for-the-wrong-reasons lot. But all is not lost with this lot either.

Albeit an improbable task, misbeliefs and delusions of right wingers can be neutralized. The right kind of education, counselling sessions, training to view Muslims as real people and not freaks can be a good start.

Also, constructively  inspiring words from popular leaders like PM Modi (who has an army of bhakts) can make a world of difference. Sure, it’s dangerous that an individual can influence opinions and actions of probably millions of people, but that’s a problem for another day. For now, Narendra Modi needs to step up and make sure that he can pass on a piece of his seemingly secular mental make-up to his legions of followers.

It totally sounds preposterous to imagine that counselling or education can change an enraged bent of mind and make them peaceful, but it’s a start. Not in our lifetime, but we’ll get there.

What do you do with the Left, though?

How do you educate someone who is scholarly, articulate, cocky, dismissive, and manipulative? The influencers from the Left wing possess all these qualities, and then some. The educated class in India looks up to them. But it’s not the arrogance that offends you, it’s their sheer disdain for logic. An average manipulator makes an effort to put the weight of logic behind his otherwise hollow rhetoric and actions, but not a leftist.

Army deployed in Srinagar, for our intelectuals, is a disposable resource. A soldier’s ultimate destiny is to be a martyr, so die he must. But if that soldier on a given day kills a terrorist or uses a terrorist-aid civilian as a shield to protect lives of a dozen other soldiers, it commands national outrage. So what if a Burhan Wani is shooting at you, he hasn’t yet managed to put the bullet in your head. Listen to a leftist – When bullets are flying in your direction, what you got to do is come out of your hiding and negotiate with the guy trying to kill you, ask him to surrender. Because that works so well.

So what if 45% of India’s population speaks Hindi (the next most spoken language is Bengali, at 8%),  You are a fascist government if you are taking initiatives to promote Hindi over English. The regional languages of India are under serious threat by you putting up signage alone in Hindi. A Karan Thapar would write a puff-piece editorial in English, claiming how by encouraging Hindi, the government is pushing its agenda of India becoming a Hindu nation where Muslims and other ethnicities have no place. Let’s say that again just in case you missed the point: Promoting a language spoken by nearly half the country is a sign of intolerance towards Muslims.

And then there was Intolerance, the Award Wapsi, the Vemula suicide, the Kejriwals, the fascism, the Bhaktism. Here’s the thing, you express how dangerous India has become to live since 2014, you just earn yourself the Intellectual title.

So, India was Hindustan then and Lynchistan now? Well, here are some facts from 2013, courtesy Anand Ranganathan‏.

Islam apologists are the people who believe that by merely criticizing a religion-driven act of extremism is equivalent to endorsing racism. Every time a news breaks that some Muslim extremist bullied a woman for her choice of clothes, the Left brigade comes charging in to dig up decade-old events where a Hindu extremist might have done something remotely similar. A terror attack claiming lives of a 5 dozen people by an Islamic terror group is met with “so what, Sangh beat up a man for eating cow” alibis.

And it’s not just the political space. Leftists like to think of themselves as champions of gender equality. Just that, all they practice and propagate is reverse sexism. So you have one Barkha Dutt glorifying a woman who has a history of stalking men, putting out their morphed pictures, physically harassing them. For Barkha and the likes, it’s the men  on the receiving end who are at fault. Because physically and emotionally abusing men, putting out morphed pictures to prove an affair, taking advantage of gender-stereotypes, and similar acts makes a woman the ultimate icon of feminism.

Hell, merely showing a woman in kitchen is the worst form of misogyny. Damn the fact that it’s this woman herself who bosses her husband to work till late hours in office and then cooks food for him out of love and care.

Why is it so fucked up? Because it is.

About a year and half back, Zaira Wasim left everybody shocked when she announced he is quitting her career for religion.

The star of bloclbusters like Dangal and Secret Superstar practically threw her potentially very long and successful career away because it was “taking her away from her Imaan.”

Fair enough, everybody has the right to practice their own religion and who are we to poke our noses in their business. And then, you think back to the innumerable artists from Kashmir who were either killed or forced to relinquish their artistry and career after receiving death threats.

Remember the All-Girls Band Pragaash That Quit to Save Their Lives?

Yes, those girls. The ones who gave up on their career after Grand Mufti announced Fatwa against them.

This is what one of the girls had to say, “We just quit (singing and music) only because of the people of Kashmir, as Mufti sahib said it is un-islamic. We did not know that they are unhappy with our music.“

One of the girls from that band even went into depression, and I shudder to imagine what they may be doing as of now at this moment after being forced to give up on a rather promising career in music.

Does that leave you angry and sad at the same time?

When Zaira Wasim announced all of a sudden her decision to quit, the Nidhi Razdan and Quint of the world, being the respected voices of media, put their weight behind these Grand Muftis.

They decided to run shows and release videos bashing Hindus. Not kidding.

Nobody from the left-liberal gang stopped to think that a 17-year old girl may not have the emotional complexity or maturity to take a decision of that nature. I am not even implying that I’m sure she was forced to give up, but instead of bashing people quo raised questions, you could have reached out to her or raised questions yourself?

Instead of trying to help these girls, the left-liberal mafia in the country glorified the mullahs and muftis who keep muzzling the freedom of girls from Kashmir, literally and figuratively telling them that their place belongs in kitchen and in bed for their husbands’ pleasure.

So who are you, Scholarly intellectual or Ignorant Bhakt?

Saying out loud you hate Hindus? Swag, you are an intellectual!

Just used “good” and “Modi” in the same sentence? You Bhakt, you need education!