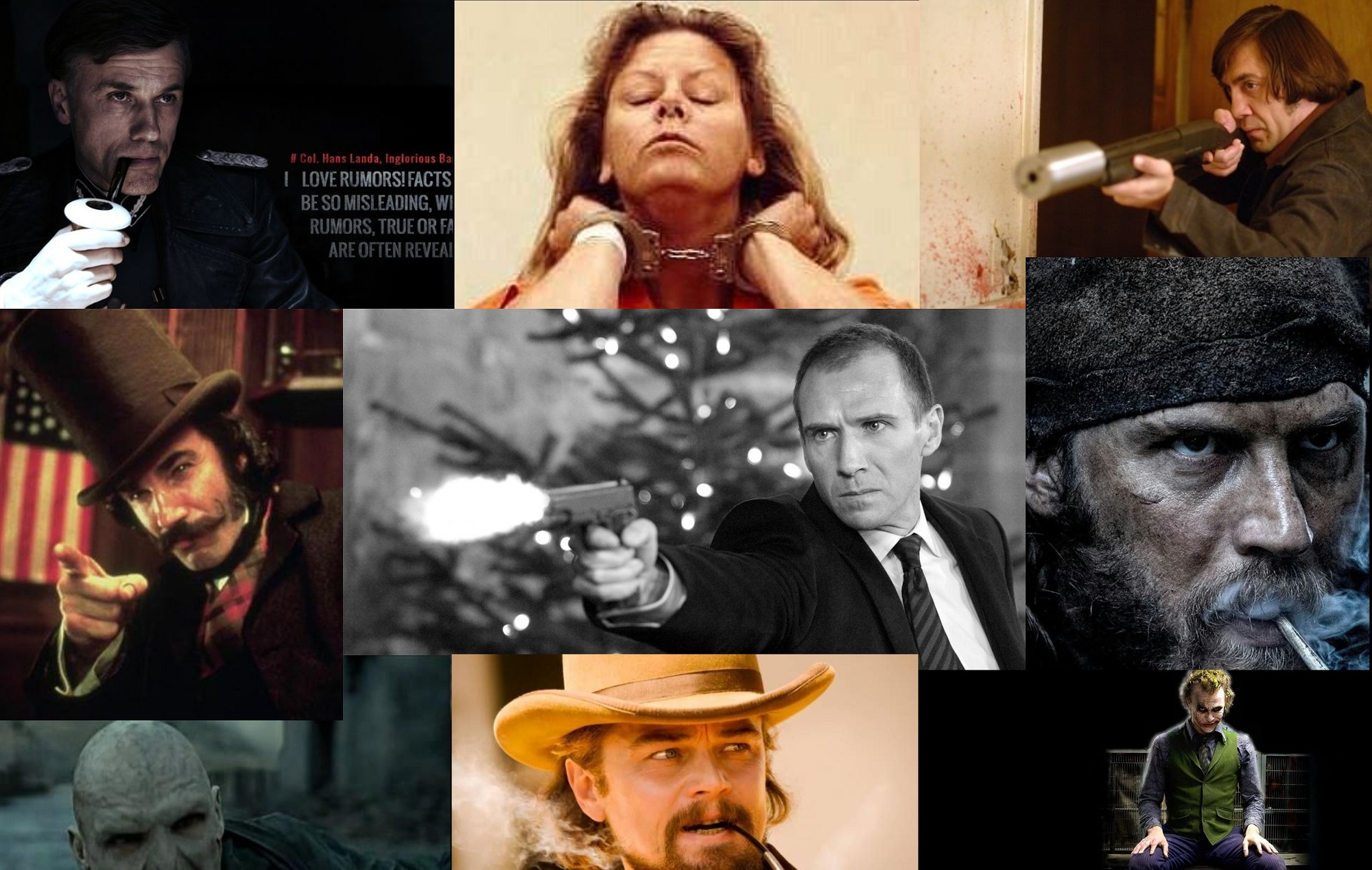 Some of them are gathering storms and the others are just born to be bad. These are folks who complete our heroes. Without them, there ain’t no show of valor and there ain’t no corkscrewed souls. They are evil, and they bloody well know it.

The best movie villains since 2000 have learnt from and paid tributes to the great performers who immortalized the place of villains in a motion picture in the century that came before.

To state the overstated, movies are incomplete with villains – the men or women who are antithesis to the lead actors, mostly heroes, so that they can make them look like the good guys that they are. In the cinematic history, there have been thousands of performances that left such an impact on the audience that we remember some movies just for the bad guys who pulled us into the story and made us care for characters these bad guys were trying to harm. That list is going to be huge, though.

Here are the best movie villains of the 21st century who gave us long lasting jolts of monstrosity:

Ready for an outlandish shootout? Harry will grab you by your lapels, hand you a gun and set the pace for a chase that you’ll surprisingly end up loving. It’s your life..run! He had but just one rule, “You can’t kill children” and you bloody well trust him for honoring that rule with all heart and guts. It was syncretism in Ralph Fiennes’ fairytale town. Appallingly terrific.

Also, this is not the only role that Ralph Fiennes finds a place in this list for.

In Bruges’ Harry Quote: I do want the guy dead, I want him f***ing crucified but it don’t change the fact that he stitched you up like a blind little gay boy, does it?

Most heartless of all, Tom Hardy’s John Fitzgerald was an SOB who prized nothing in life more than money – not even a starter level empathy for his fellow soldiers.

The harsh landscapes of the Oscar winning and one of the best Hollywood films of the decade The Revenant were made even harder to survive by the sheer savagery of the men who were coward and cruel in equal measures.

Like all his performances, Tom Hardy got into the cold skin of his character and made the viewer loathe even at the sight of him. That said, you’d still would want him to last as long as he can once DiCaprio’s Glass makes his way back and finds Fitzgerald for the final showdown.

Oh, you just couldn’t keep her off the loop when it comes to listing down the sinners. Much before action and daringly written films like Mad Max, Atomic Blonde or even Fast and Furious 8 happened, one of Hollywood’s sexiest women Charlize Theron had us quivering in her role as a baleful woman in Monster

For her role in Monster, Theron had to shed – and shred – her image of a beguilingly seductive woman. She was a baleful, ugly-by-virtues sinner.

I am not complaining. This was probably one of the first movies where we got to see the range that Charlize Theron possesses, as the character of Aileen made Theron stretch her acting muscles to the fullest.

Fiennes is easily one of the most versatile actors in the world, and this role is such a departure from some of his performances as the dashing, sensitive man in movies such as The English Patient.

Bardem has always been an actor to reckon with, but his turn in this Coen Brothers classic elevated him to a new status altogether. He followed this terrific role with another standout performance in Skyfall opposite Daneil Craig.

Over his long and illustrious career, DiCaprio has played every kind of a role. He says no to nothing – an autistic 17 year old (What’s Eating Gilbert Grape), a lover boy (Titanic), a carefree or sometimes a junkie (The Beach), a young man filled with bitter feelings of revenge (Gangs of New York), a young, mentally distressed man burdened by ambitions (The Aviator), a crazed out, genius of a businessman and fraud (The Wolf Of Wall Street). But, Calvin Candie took him into a completely different territory. And boy, he delivered.

Calvin Candie Quote: In the skull of old Ben unburdened by genes, these three dimples exist in the area of the skull most associated with servility. Now bright boy, I will admit you are pretty clever. But if I took this hammer here and I bashed it in your skull, you would have the same three dimples in the same place as old Ben.

Here is the de facto villain of his times. Like in most of his movies, Daniel Day Lewis just chews up the scenery and his co-stars in Gangs of New York (and this statement comes from a hardcore fan of Leo). He is so nihilistic and so good, you wish him to simply continue.

Daniel Day Lewis is a moment of acting, and it does make us sad that he quit acting rather early in life. Lt’s hope there is a comeback of sorts waiting.

Bill ‘The Butcher’ Cutting Quote: You are neither cold nor hot. So because you are lukewarm, I will spew you out of my mouth. You can build your filthy world without me. I took the father. Now I’ll take the son. You tell young Vallon I’m gonna paint Paradise Square with his blood. Two coats. I’ll festoon my bedchamber with his guts.

Even an outlandish villain of a CGI-fest superhero film needs a good actor who can make his character memorable. Tom Hiddleston is apparently the right man for that job.

Playing Loki across multiple Marvel films and universes since 2011 – when he first appeared in Thor – Hiddleston has made what seemed like a boring, cartoonish, evil step-brother, villain so interesting and compelling that we may not root for him which watching movie, but we have always been rooting for Loki to return every time Thor or his fellow villains kill him. And, he does.

Move over Hitler, make room for Hans Landa! Reputed as ‘The Jew Hunter’, Christopher Waltz forcibly pins you with his denatured concoction and pounces on you with blissful lunacy. Thanks to Tarantino, Hollywood discovered a true acting genius.Though, one might add that his body of work outside Tarantino’s films isn’t that big or impressive. Carnage was good but his biggest film, Spectre, turned out to be a disaster – at least for the parts that had Christopher Waltz on screen.

Hans Landa never needed to pull the trigger anyways. His interrogation (if that’s what you call his intimidating conversation with poor Jew-helping souls), was the highlight of the movie, and that’s saying something considering the movie is a nightmarish masterpiece.

Col. Hans Landa Quote: What a tremendously hostile world that a rat must endure. Yet not only does he survive, he thrives. Because our little foe has an instinct for survival and preservation second to none… And that Monsieur is what a Jew shares with a rat.

Ladies and gents, I present to you the mountain of villains – Joker. Before the first word is spoken.

Heath Ledger’s Joker was a giant leap forward, upward from the passé – I am tempted to say, corny – villains of superhero flicks.  The maddening, deranged face of Joker on the Gotham streets gave our senses a serious pounding.

In his plain and simple words, Joker was a man of simple taste. He didn’t want money. He enjoyed dynamite, gunpowder, gasoline and all the things that come cheap, prove costly. Joker was an agent of chaos, money could never give him a hard on!

Christ, we still can’t get over those small flicks of the tongue and wiggles of the finger!

Heath Ledger’s Joker Quote: “ If tomorrow I tell the press that like a gang banger, will get shot, or a truckload of soldiers will be blown up, nobody panics, because it’s all, part of the plan. But when I say that one, little old mayor will die, well then everyone loses their minds! Introduce a little anarchy, upset the established order, and everything becomes chaos, I’m an agent of chaos , and you know the thing about chaos? It’s fair.”

These big, brassy villains plot a plan of crackerjack design. Then the plot ripens. Then it explodes; leaving behind a mess of viciousness along with a dim whiff of rot. It reminds us why we go to the movies.