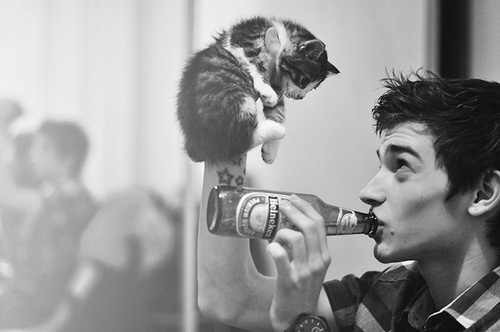 Being rejected is rotten. Being heartbroken is horrible. Suffering from unrequited love is insufferable. No two ways about it. Of course, you can always Google motivational quotes about how loving oneself is the biggest and most fulfilling love-affair you can have. But the fact is that being heartbroken sucks! So apart from the usual routine of sitting around friends, drinking, moping and regurgitating the events that led up to the sad moment, what does one do that’s kind of un-trashy, random and yet weirdly fun?

Here’s my List-of-five checklist to help get over that achy-breaky-heart feeling. This is just a fun list, so don’t get your knickers in a knot over them. But having said that, do make sure you add to this list with your own maverick ideas. And most importantly, get over that heartbreak, pronto!

1. Eat (or drink) something till you’re literally ‘sick’ of it It’s very logical! The thing is when you’re sick, you hardly have the time to think about anything else. Broken hearts become passe because you’re either hanging over the toilet seat or sitting on it. And then returning to bed, exhausted and sick again hardly leaves any time for any other miserable feelings. So for example, if you were to eat a lot of papaya till you were sick of it (truth be told, it doesn’t take too much of the fruit to get sick) for example, that would work! It would also make you very slim. Or lots and lots of oily wafers. That will make you fat…and sick. Or something like prawn curry or fried eggs. Imagine having oodles of it. Chances are you’ll end up hating the thing or being allergic and sick. So well, you get my point, right? Cure one ache with another ache. Where is the time to feel sad about your heart, when your stomach is churning and your head is splitting? Elementary, Watson.

2. Become a Forward King or Queen

You’re feeling nasty and if you can’t cure it, let someone else endure it. So forward away all those pesky ‘motivational morning’ forwards or ‘cutesy love’ forwards or ‘forever friends’ forwards or worse still ‘bad santa banta type pj’ forwards to each and everyone. Including your parents. Just keep it consistent, till people expect nothing else but hateful forwards from you. They will probably start avoiding your messages or even worse, block you. Then you will have answered the question that plagues all of us: How hateful can I get? And in this knowledge will lie the answer why you were dumped in the first place. Just saying.

3. Speak to your Mom about Marriage

I can tell you with cent percent certainty this will work! As soon as you’ve heard her going gung-ho about some obscure relative who is looking for a bride/groom or the various matrimonial alliances she has lined up or the ‘types’ of guys/girls she considers cool, you’ll know for a fact that no amount of heartbreak is worse than asking for her advice. In these conversations you will discover that being rejected is uncool but asking for your mom’s advice on dealing with them, is far more uncool. So you’ll do what I did, steer clear and sound cheery. Finally, the fake-cheer will become real-cheer and you’ll have kissed your heartbreak goodbye. Mother promise!

This one is a no-brainer, quite literally. And we are lucky that Bollywood has a repository of such cinema to offer. So take any of the movies from the 80s or 90s and in all likelihood, it will be a movie that will help you forget your sorrows in a jiffy. Either by making you laugh till you’re rolling off your bed, or by giving you a headache of such mammoth proportions, you’ll go back to Point Number 1 in my list. So invest in trashy films – lots of them with potent quantities of melodrama, covert sex and pointless violence…oh and zillion superbly forgettable songs. Watching them can be cathartic, believe me. Even if it isn’t, it will probably start you thinking on your own film script. “Surely, I can make a film better than this one” may occur to you. And voila, heartbreak over.

5. Get ‘mentally fixated’ on something

Let me warn you that this will only work if what you get fixated on, is a short-term ‘madness’. Like exercise for example. I remember this time, when I was almost mental about waking up at 5 in the morning and running. It lasted for about six months, but my body thanked me for it. A friend told me about how he overcame his depression by hitting the gym with a vengeance at 5 in the morning, every single day! And soon enough, not only was he over the heartbreak, he was buff too. However, I don’t recommend this for people who are a little manic and disturbed. Then your ‘fixation’ could be creepy – like stalking your neighbour at work, for example. You don’t want to be slapped in public. But if your fixation is hitting the gym or cooking or watching films or talking to self – hell yeah! Go right ahead. It takes a a fix to un-fix you.

Whatever random method you employ to overcome that heartbreak, go ahead and do it. Some people swear by coffee bars. Others tell me long phone conversations help. Whatever rocks your boat, I say. Or should I say, steadies it. Soon, you’ll realize that while a little part of you is dead forever perhaps, a whole new part of you has remained alive to tell the tale.

Spread the love
Tags: Get Over Heartbreaks, heartbreak, How To Cure A Heartbreak In Random, How to recover from heartbreak, Hurt in Love, Leave the Past Behind, love, Silly Ways!