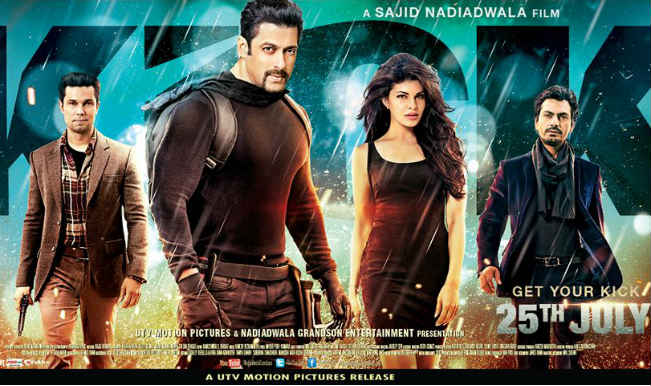 Salman Khan’s Kick is finally out in the theatres, and that’s what how our critics have judged it: It was bound to happen.

At some point, a canny producer was sure to realise that all that matters in the kind of movies Salman Khan does nowadays is Salman Khan.

It is a pleasant surprise, thus, to see producer Sajid Nadiadwala taking his directorial debut seriously, making sure every part of the engine is slickly oiled.

The loopy script coasts along breezily, Ayananka Bose’s cinematography is lush (and frequently more artful than you expect from a Salman project), the girls are considerably attractive, and — perhaps most importantly — the film smartly avoids the self-serious drivel that can ruin a shamelessly silly action film. (Case in point, the ponderous Dhoom 3, Kick, in one line, is basically Dhoom done right.

It looks good, moves fast, shows off its superstar. In the world of harebrained Bhai films — Dabanngincluded — Kick is the best made and the most fun. If you’re a fan, you just hit the jackpot.

There are certain ground rules for a Salman Khan film. While most heroes work their way towards earning the title in their respective films, Salman Khan, from the very first frame establishes who the boss is. What follows is a constant reminder, approved by a cheering audience. A quintessentially Salman-esque film, Kick is every bit the masala entertainer that the Bhai-worshipping audience was craving for after Jai Ho.

Seen purely in the context of its genre, Kick is an entertainer worth a couple of hours of your time on the weekend; more so if you seriously take to his dialogue “dil main ata hoon, samajh main nahi.” The film is endearing in bits, but rational? We’ll let you decide.

The story looks good on paper-as indeed in the trailer. On the big screen though, with all its major loopholes and nauseating screenplay, it has turned into a mindless action drama. It is understood that like any other Salman film Kick too offers never ending maar-dhaad, over-the-top emotions, high-pitched characters and juvenile jokes all packaged in the form of a mass entertainer. These elements are, in fact, very intrinsic in the design of this kind of venture. But you start feeling nausea once the silliness and the flat story-line start getting on your nerves.

Watch Kick only if you are looking for-or else, will be happy with-the following offerings

Watch Kick only if you are looking for-or else, will be happy with-the following offerings

The star-performer carries the weight of the entire film comfortably on his broad shoulders. Everything he does on screen is emulated by his fans pronto: styling, hair style, killer dialogue, dance steps et al. Referred to as ‘Bhai’ by those close to him, he is now the ‘Bhai’ or the iconic on-screen characters he has portrayed over the years — Prem, Radhe, Chulbul Pandey, Lovely Singh, Tiger — for zillions of fans across the globe.

KICK marks Sajid Nadiadwala’s rendezvous with direction and though the debutant director may have looked Southwards to choose the story, when it comes to executing the written material, the inspiration is clearly the West: the larger-than-life Hollywood fares. Having produced over a dozen movies till date, Sajid has abundant experience and expertise and knows precisely how to use the familiar tropes to his advantage.

Latest posts by Shivali (see all)