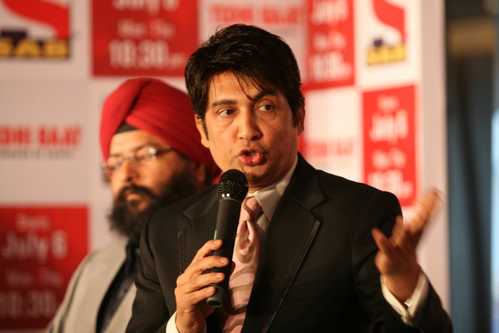 So you have a tried and tested format, painstakingly selected participants, and a lot of other mambo jambo when it comes to TV shows. What among these do you reckon grabs the most attention? None.

Any kind of show’s USP is its host, everything else comes a distant second. Give your host the most boring matter and format on earth and he or she will make sure boring does not bore you (or some can try at their best). Your hosts talk about politics, about sports, about entertainment and of course, about scandals. At times they just talk, for the heck of it. So, in all these years of Indian television, who have been the best TV hosts?

His TV stint has been less than successful, but it could never conceal the infectious charm King Khan exudes in every avatar of his. For me, SRK wasn’t bad in Kaun Banega Crorepati. It’s just that people grown up on the Amitabh staple didn’t want to see anyone else occupying that chair. Shahrukh’s sense of humour and quirkiness is known to all, and that is what he brings to the TV – be it in award shows or reality programs.

MTV hosts are usually most skilled at their arts. Gaurav Kapur leads the pack. He can be anywhere you want him to be at. Music show, movie masala show, or Cricket tamasha show (IPL).

Farook Sheikh’s  Jeena Isi Ka Naam Hai  may not have glued the whole nation on TV, and he may not have won many votes for his mike skills, but he was easy on eyes, and there ain’t no doubt about that. An unsung TV Show host, Mr. Sheikh just went about his business interviewing the biggest of celebrities. Smaller celebrities were never rushed through their moments, bigger ones were not indulged in the usual overwhelm they are so used to.

Adorable anchor and an untapped actor – that’s what I can call him! Antakshari was laced by a thousand singers, but its true voice was Annu Kapoor. Here was an anchor who didn’t give a hoot to the camera. Keeping the energy levels high and ensuring that the participants have a gala time is all that mattered to Mr. Kapoor.

Arguably the most effortless and rhythmical of all. Mini Mathur belongs to that extremely rare breed of television hosts who don’t even have to try. Not one bit. She’s a pretty face alright, but the non-fussy Mini Mathur isn’t in the list for that. I am tempted to say that while anchoring, she flows like a river, but I will spare you the corn. May be I’d say, she flows like the cover drive Tendulkar hit Dale Steyn for just the other day. Yeah, almost like that.

Remember those good ol’ Surabhi days? Oh, those were the times of Doordarshan, ‘rukavat mein khed hai’, ‘hamdard ka tonic sinkara’ and many more uniquely magical moments on TV. Renuka Shahane and Siddharth Kak remain as the last anchors who presented their show without much hoopla. Nestling ourselves comfortably in front of the idiot box, and we were ready to be taken to enchanting corners of India – Kak and Shahane giving us company.

Here is the de-facto TV host of our times. Star Plus once awarded Amitabh Bachchan the title, ‘Pitamah of TV’ and you would just want to agree, no? For his baritone booming, debonair-rich demeanor to that ‘Please take care of yourself’ sign off message, Big B has never been short by even an inch from unbeatable mastery.

Throw diplomacy out of the door. Salman knows how not to be sweet and still not cross the line, some times, while pulling a joke on someone in attendance. This is what I wrote earlier about Salman Khan the TV host, “A fearless anchor, Salman goes unbridled with his loopy-ness. He has an audacious attitude with a gunmetal persona and a quicksilver spirit ready to thaw the people out of their comfort zone. And it’s fascinating to watch it all happen.”

For blatancy, the man can’t be beat, nor for wits.

You might hate him for the filmmaker he is (oh, I do..I loathe him!) but he is undeniably one of the best TV hosts around, and not for a lack of reason. Putting his industry friends in a spot of bother is his strong suit, and it’s quite amusing and interesting to see him attempting to harvest some controversial juice out of every one of them.

As much hate as he gets from the woke breed, the fact remains – much to the heartburn of many – that Kapil Sharma is the king of stand-up comedy in India. The YouTube stand-up comics are a gifted lot, but maintaining the humor quotient despite having to appear on TV twice a week and handling the pressure of TRPs is an astonishing achievement.

Shekhar Suman’s stuff is concoction at its zingiest.  His Sameer in Dekh Bhai Dekh catapulted him to new heights. But it was not until Movers and Shakers that Shekhar Suman truly arrived and became a household name. Of all people, he made Atal Bihari Bajpayee into a fun topic.  ‘Yeh achhi baat nai hai’, anyone??

Shekhar Suman’s satire remains relevant even after 15 years the show started and he continues to be the top draw for any show he is hosting.
One can always download the Movers and Shakers episodes from YouTube; the jokes might seem a tad too outdated, but that wit is timeless!

These hosts are performers who tickle us, entertain us, glue us and at times give us the only reason for not touching that remote.