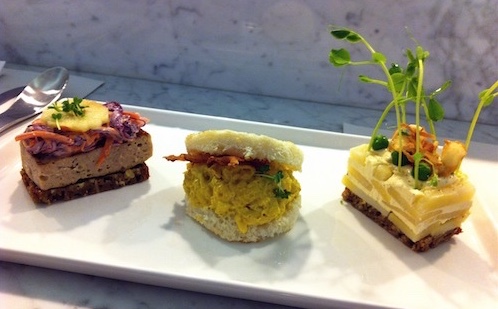 The humble potato is the poor man’s delight. The bacon – we all know, is the foodie’s paradise. That said, if you seriously want to experience the Danish food culture, eat not beyond the three essential meals that begin with breakfast and conclude with dinner.

It’s still a very disciplined following for them to eat the first and last meal at home, reserving the lunches for a get together in the gardens. Simple, healthy choices that are made according to the hour of the day keep the Danes energetic and fit throughout the day. Below are a five Danish Mads (yes ‘mad’ means food in Danish) that you must allow your taste buds for a stint with:

Smørrebrød: It’s bread with the most bizarre history – one that would rather seem apparent and hence hilarious. So one day the Danes realized they could, instead of wiping food on their plates with bread, top it on a layer and invent a more civilized way of eating. That’s Danish culture for you – hygienic ! Asparagus with Salmon: Another simplistic beauty, Salmon dressed with Asparagus is a cold meal eaten for lunch. It’s a raw delight with strong, succulent yet rich flavours. Not a punch in your mouth types but strong enough to give you a smack on your lip. Smushi : Think Sushi as a variant of Smørrebrød or an open bread sandwich. Since the Danes never miss out on the carbohydrate base, they are always rolling on bread. Varm Kålstuvning: One for the vegetarians, Varm Kålstuvning, this dish is made of cabbage, eggs, pepper and flour as the main ingredients. Milk and vinegar add slight tanginess to the otherwise bland dish. Mustard adds the zesty flavour. Purløgsmør: Easy to cook, easy to eat, Purløgsmør is a Danish snack comprising butter, chive and a sauce that has a name often left for the Danes to pronounce. As far as the snack is concerned, it’s a feast! For an era as long as the wall of China, Nordic cuisine has been neglected and standardized. It is now that the Danish palate is expanding, little by little, adding flavours and spices that have a cosmopolitan tang. Nonetheless, the Danes haven’t gone awry with their lifestyles. Or at least, they don’t have a reason to blame their food culture about any health problems.