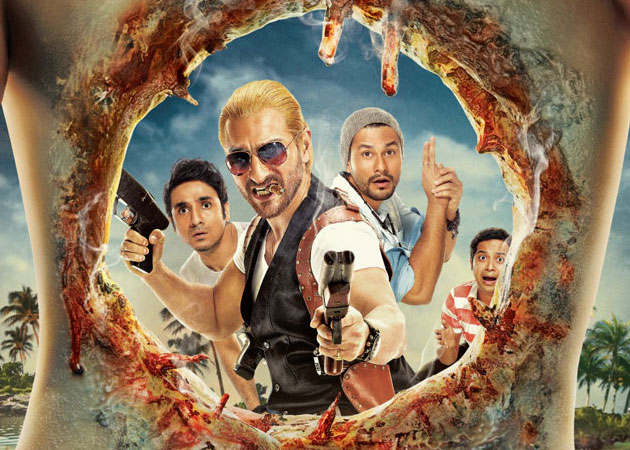 India’s first zombie movie, Go Goa Gone has released, and her is what what critics have to say about this zomcom GO GOA GONE comes across more as an adventure flick than a conventional horror film. Sure, it has its share of violence and gore, besides some cuss words, rave party et al, but the fun quotient is smartly integrated in the screenplay and what comes across is crazy, madcap amusement. Raj and DK are enthused by Hollywood movies and there’s no denying that GO GOA GONE is a film with Hollywood sensibilities. But the best part is that the film never gets dark or depressing. The wit and humor, generously interwoven in the narrative, keeps you smiling all through, despite the blood and gore. On the whole, GO GOA GONE is experimental since something like this has never been attempted earlier. But it’s fun, witty, amusing and yes, thoroughly entertaining. The youngistaan is sure to love this mad, mad, mad ride!

Go Goa Gone is only mildly scary, but it is often very, very funny. What works is its refusal to pull back and away from its chosen course. It goes all the way down the path to the bitter end, even at the risk of turning far too jokey to be effective. That is the film’s major weakness. The zombies are, well, zombies. They multiply like maggots and after a point cease to terrorise. The film relies more on verbal exchanges than shock effects to carry itself forward. But it remains engaging despite some of the slack stretches. The acting by the principal members of the cast – Saif Ali Khan, Kunal Khemu, Vir Das and Anand Tiwari – go along with the zany spirit of the film.

‘Go Goa Gone’ is a pleasant watch, and despite the innumerable scenes depicting flesh and gore, doesn’t leave one with an urge to vomit. The dialogues are witty and are mostly responsible for invoking a laugh. Sense, logic and sensibility be damned – go ‘keel dead peepal’! Kunal Khemu, Vir Das and Anand Tiwari all look tailor-made for their characters. They slip into the roles with ease and perform this trio of frustrated-in-life young men well. Kunal Khemu’s Hardik – the guy who doesn’t stop flirting with any woman – with or without a brain – is well-played by the actor.

Go Goa Gone is a fun watch. There are plenty of innocent-sounding, slow-exploding one-liners, which are funny. Comedy comes naturally to Khemu and Tiwari; their lines are seamless and believable. Ed and Shaun they are not (fromShaun Of The Dead) — Khemu is more in-your-face, and Tiwari is way too understated. Also, the background score and the sound design is kinda wacky. Likable, much. Ramsey, this is NOT. Only, the makers could have really, really come up up with something more…grindhouseish!