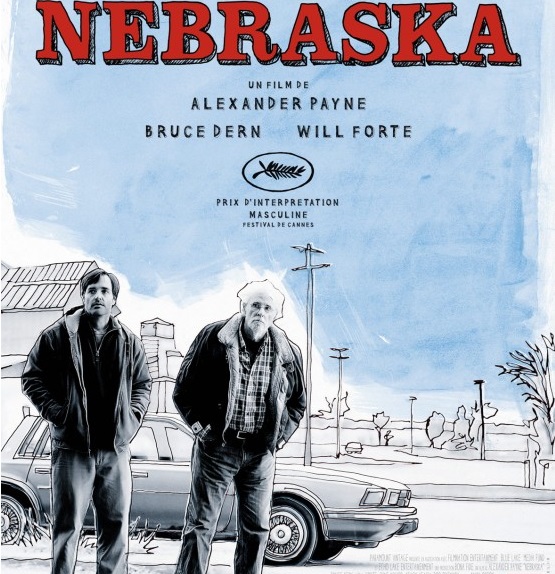 You know that feeling when you pour out of a movie hall, still absorbing what you just watched, and every word is like “OhMyGodIdon’tKnowWhatHitMeSoDope.” Nebraska, for all its laidback rhythms and snail-like pace, hit that sweet spot for me. In pathos, it can’t be beat, nor in playfulness.

This Bruce Dern starrer is categorized into the drama genre, but I found it unburdened by the maudlin impulses of drama. Shot in monochromes, Nebraska takes getting used to. This is not to suggest it’s an exercise in intellectualism. It’s one of those rare motion pictures that is unapologetically human and yet provides you with a cognitive quiet – the two feelings I believe are mostly at odds with each other in the real world.

Nebraska is the story of a father and son bonding over a road trip that the son only agreed to because the father won’t listen to reason. Yeah you’ve heard that before, except this one has a really old father and a very odd reason for the trip.

Bruce Dern’s character, Woody, receives news from a company in Nebraska that he’s won a million-dollar prize in Mega Sweepstakes. He’s sick, can’t be trusted with riding a lawnmower. So to claim his prize, he decides to set off on a journey from Billings, Montana to Lincoln, Nebraska on foot. His younger son, the affable David, doesn’t want his father to die a nomad. Convinced that it’s a scam, he nevertheless decides “let him have his way, how long does he have anyway.” Besides, Woody’s hometown of Hawthorne is on the way, that’s something to look forward to! And thus begins a journey back in time for Woody and David. What follows is a lot of squabbling and bickering, melancholy, joy, nostalgia – all operating on a non-narrative plane.

You cannot write a review of Nebraska and not mention Woody’s wife. June Squibb is a firecracker as Kate Grant, a wife so worn out by her husband’s theatrics that no expression comes out without cussing.

This Alexander Payne gem left an impact on me. That’s not because of a divine message—it didn’t have one—it just moved me. I left the theatre overcome with an urge to take a chair out in the front yard of my house, at 2AM, just to watch the road.

And because I liked the film so much, I’ve since recommended it to a lot of friends. We don’t talk anymore.