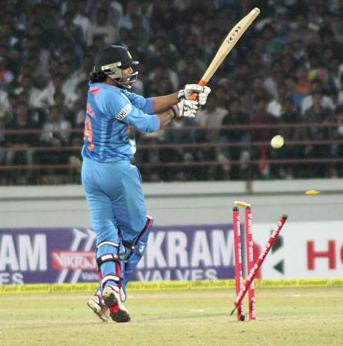 Critical comments can be cruel, but at times, they can be downright funny. Ravindra Jadeja has been a butt of internet jokes since time immemorial now. Here is a list of hilarious fake quotes I found on sportskeeda  http://bit.ly/13CAgvf. Most of them are the twisted versions of the quotes great players have made on Sachin Tendulkar. We at LeisureMartini, Lifestyle blog for 20 somethings, couldn’t stop sharing these with you:

“There are 2 kinds of all-rounders in the world. One – Ravindra Jadeja. Two – Adnan Sami!” – Bappi Lahiri

“I am unfortunate that I only get to bowl at him in the nets.” – Harbhajan Singh

“He has been out of form longer than some of our guys have been alive.” – Unmukt Chand

“If I am to field when Jadeja is bowling, I will field with my helmet on. They all hit him so hard!” – Cheteshwar Pujara

“I saw him playing on television & was struck by his technique, so I asked my wife to come look at him. Now I never saw myself play, but I feel that this player is playing much the same as I used to play, and she looked at him on TV and said – are you effing out of your mind?! I’d like a drag of whatever it is you’ve been smoking, chump. Now get dressed…you are going to see an ophthalmologist!” – Sir Gary Sobers

“Technically, you can’t fault Jadeja. Seam or spin, fast or slow every goddamn thing is a problem.” – Geoffrey Boycott

“The pressure on me is nothing compared to Ravindra Jadeja. Jadeja, like Ram Gopal Verma, must always fail. The crowd always expects him to fail and it is too much pressure on him. And, he rarely disappoints them.” – Jacques Kallis

“Don’t bother bowling him good balls, he gets out to the bad ones.” – Monty Panesar

“Jadeja has been sent by N. Srinivasan to play cricket and then go back…to Dhoni.” – Ravi Shastri

Anything can happen to us if we’re on a plane flying over a cricket stadium in India with Ravindra Jadeja at the bowling crease.” – A paranoid air-hostess

“I’ll be going to bed having sweet reassuring dreams of myself just running down the wicket & belting him back over the head for six!” – Shoaib Malik, Shane Watson & David Warner (in unison)

“When Sir Ravindra Jadeja first travelled to Sri Lanka to play in yet another of those meaningless ODI series, Shahid Afridi was yet to come out of his 2nd retirement, Tiger Woods was yet to be accused of infidelity, Balotelli had never earned a red card & Kristen Stewart was still a virgin.

When Jadeja embarked on a glorious career taming Kulasekara & co., Poonam Pandey was a name unheard of; Suresh Raina’s nephew was in his nappies; baby Bachchan was still a stray sperm swimming in AB’s pelvic cavity & SRK was yet to promote Ra.One.

It seems while Time was having his toll on every individual on the face of this planet, he excused one man. Time stands frozen in front of Jadeja. We’ve had champions, we’ve had legends, but we’ve never had a Jadeja & we never will.” – Time magazine

“The earth has carried the burden of Jadeja for 24 years. It is time we carried him on our shoulders.” – Virat Kohli

“Only he can play that leg glance with his thigh guard.” – Waqar Younis

“He is just what the doctor ordered (Euthanasia).” – Ravi Shastri “Beneath the helmet, under that unruly curly hair, inside the cranium, there is something we don’t know, something he himself doesn’t know either – whether he’s a batsman or a bowler. Forget us, even those who are gifted enough to play alongside him cannot even fathom. When he goes out to the ground, people switch off their TV sets for the high octane excitement of watching lawns grow.” – BBC

“Cricketers like Jadeja come once in a lifetime, and I am sorry he didn’t play in my time. Could have added a few more cheap wickets to my tally.” – Muttiah Muralitharan

“Commit all your crimes when Jadeja is batting. They will go unnoticed because even the Lord is dozing off to sleep.” – A placard at the Saurasthra Cricket Ground

Internet jokes on Jadeja are only growing, despite of his recent successful run. His place in the Cricket team of India seems stable though