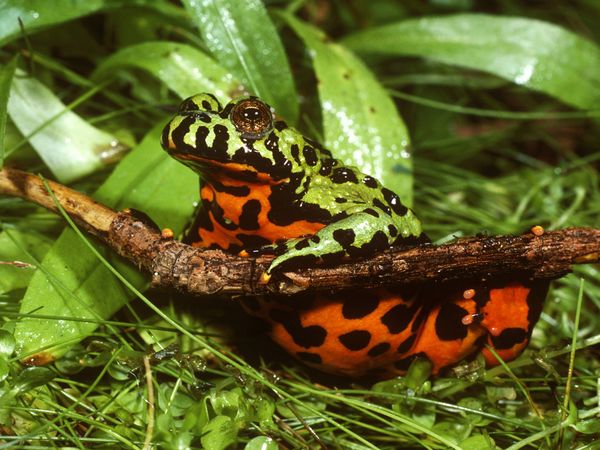 ‘Envoy’ of the other animals roaming a similar territory, sea slug is perilously out on its own. It is not blessed rich with shell, but that doesn’t make it prone to predators (rather, it makes predators prone to being predated). Sea slug comes in an assortment of colours, which also change to signify danger – not FROM predators but TO predators. In its gland just below the skin, this animal stores strong acids and poisons that can dismantle even the lethal of predators. An undersea trip in Japan would possibly let you have a peek and a ballet with death if you crave risk. The latest discoveries have revealed that sea slug loses and grows new penis at will. I wager you would be rubbing your eyes with astonishment looking at this beguiling beauty we call Oriental Fire Bellied Toads. With a length of around 2 inches, their colours can be mesmeric and these creatures look spellbinding till they are calm. Once they are off the hook, pinning them down appears to be the hardest job on planet earth. If you want to know camouflage, have an encounter with it, but only from a distance. Predators looking to attack it have no clue of what’s in store for them. When this toad senses danger, it pounces on the predator, flying in the air at a voracious speed. Its agility can be gauged from the fact that it flips through the air and its iridescent red and black underbelly flies right into the face of the predator. Oriental Fire Bellied Toad is for the eyes, but not of the ill-livered. Its back is covered with bristly wart looks can be vividly green to pale gray. Injection of Death – This is what a rendezvous with European Hornet transpires into. Unlike other creatures who would trick you by looking ‘fascinating and beautiful’ so that you turn into their food, European Hornet always sends you at least a feet back on the first glance. This baneful creature can be as long as 50 mm long. while in male  Hornets, the antennae have 13 segments, for females, it is 12.  I warnyou don’t go anywhere near to their ‘den’or get stings at multiple places. To Its predators, Blue Ringed Octopus says, “Eat me and you will croak” The bright blue rings on its body are a vital sign of its nuclear annihilation. When forced to be edgy, this small octopus shakes off its underwater numbness, starts glowing with its bright and shimmering blue, as if announcing it’s ready to wallop you down. With each stroke of the lash (which only happens to be its venomous saliva), it kills and does not hesitate to poison your organs one by one. and that’s when predators feel its wiser to watch from a distance.  What an irony that those who live in abandonment from civilization end up bringing it with them. Every spot these octopuses occupy becomes a tourist destination.

For the appearance of these animals, I would say they look tasty – except for the fact that it’s us who end up being their fodder.

Also Read: Reasons Why We Should Rejoice Twilight is Over

How to Take Care of Your New Body Piercings

How Much Workplace Safety Can Save Businesses (Infographic)