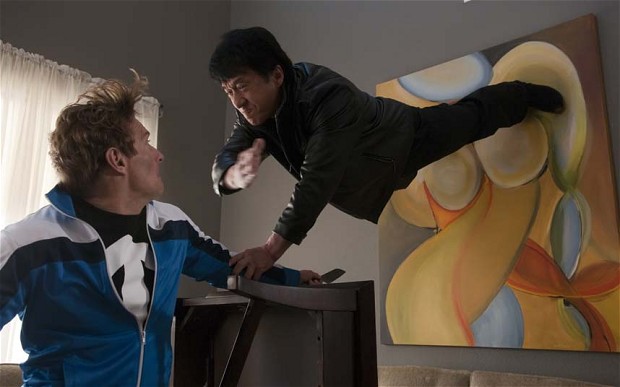 So how does Jackie tackle fear? Does he toss it in its own face, or kicks it in its butt? Neither. He rather lets his fears punch him hard enough that he feels the urge to fight back, writes Shivangi Sharma

What do you get with a mix of jovial naughtiness, serpent-like flexibility, and superb comic timing together? A blockbuster, maybe.

With a concoction that entails particularly those three elements, you can’t hope for anything less than Jackie Chan. And with ‘Chinese Zodiac’ set to rock theatres soon, we yet again have the opportunity to celebrate the valor of a rare soul who is still going strong.

It’s always been this one question – How dafaq does Chan do what he does, ever so effortlessly? I still remember watching Chan in an awe-struck mode with my mouth wide open, glaring at the television screen – as if my eyeballs were about to pop-out of the sockets. I’d often rub my eyes to be sure of what I was watching is not a video game called Jackie Chan. Surreal! Anyone who has ever watched him swirl, twirl, climb walls or just shoot an arrow (Bullseye) would say he doesn’t show a trace of fear. But Jackie has something else to tell us. “When I am faced with doing a dangerous stunt, I would be lying if I said I never get scared.” So how does Jackie tackle fear? Does he toss it in its own face, or kicks it in its butt? Neither. He rather lets his fears punch him hard enough that he feels the urge to fight back. He waits for the opposite force to expend all power – to give it all back Jackie rebukes. For someone who seems to be so adept at doing things, has life been any less than an adventure? It definitely hasn’t been a bed of roses. Jackie never received formal education – but with the kind of fan following that he has created, no one is complaining. Even Jackie would be the last person to complain. Self-education gave him all the time in the world to do what matters, and to be well-informed too.

From base jumping on hot air balloons to being dragged to death by a helicopter to jumping on a hovercraft – the deadly stunts seem like an act of ultimate ludicrousness in a Jackie Chan movie. Back flips look so smooth that you might feel like getting up from chair and trying one – That’s the kind of thrill you get from watching the blast of energy that Jackie flashes onscreen.

Wrapping the entire milieu in his a whirlwind, he sets the pace and the motion for a 4000 watts of sheer electrifying experience. Excuse me for the over-enthusiasm. Very few like Jackie Chan can manage to pull such a splendid clout and manage to keep it hooked too. With Chinese Zodiac, the world on both sides of the Pacific, once again awaits a phenomenal performance by the ever evolving Chan.

PART 2 of MOVIE MANIA: JAWS – FOR THE FEAR OF SHARKS