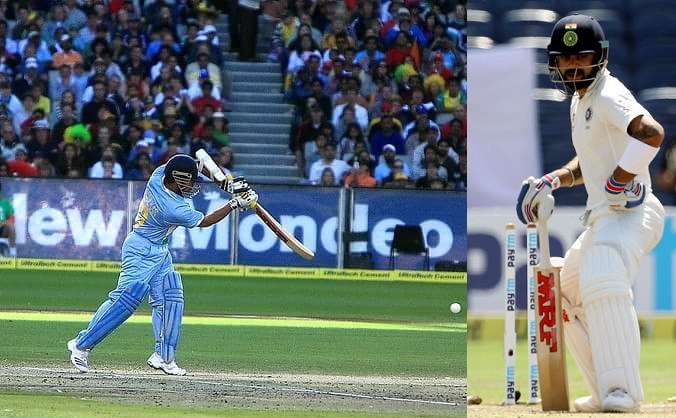 Yet another Sachin Bhakt!

Every generation likes to hoist on the pedestal at least 2-3 ‘best batsmen’ of their respective era. The 80s had Gavaskar, Vivian Richards; 90s had Tendulkar, Lara; they were joined by Ponting, Dravid and the likes in 2000s.

The likes of Kohli and Smith are staking that claim for this generation. And every single time a batsman’s stock rises, the inevitable comparisons are drawn between him and the past greats.

The Sachin-Kohli comparison are being ferociously made and the Virat Kohli vs Sachin Tendulkar war lines have been drawn between the fans.

The title may suggest that I’ve already picked a side, but let me also make an effort to be nonpartisan and put forth some solid facts.

Why Kohli cannot be considered as great as Sachin

The bowlers of their respective eras

Alright, let’s just list down some of the most feared bowlers of both the eras. Take your time while reflecting on each name on the list.

It’s pretty easy to see the sheer difference in the quality of bowling attacks both have faced in their respective careers. Kohli is in the 11th year of his international career, and I don’t see he has faced a lot of challenge up until now.

You’re welcome to suggest more names to either part of the list.

Batsmen-Friendly rules and Pitches of today

Let’s just be honest here. With the advent of T20, there is a race to make even Test and ODIs exciting. This has led to flat pitches, super batsmen-friendly rules, more restrictions on the fielding sides, etc.

Every decade, if you look closely, makes it easier for the batsmen to score. Some thirty years ago, 200 was an above-par ODI score, and today one can’t be sure with 400. If we break that down linearly (not entirely fair but a decent start) it’s 0.30 per over incremental a decade.

“Given that an opener would generally want to stick around for 15 overs or so, it’s an increment of five runs per decade in the average for the same caliber of batting.”

A batting average at a point in time and sustaining it over a period of years/decades makes a statement by itself.

“It’s in the second rung of today that the scrutiny has to be stringent. An average of 35, in the seventies and eighties, used to be good and today’s not-so-good journeyman can get to 35.”

“Then you get the perspective on say the centuries of Desmond Haynes or the average of Zaheer Abbas or the median strike rate of Richards or Kapil Dev and how with their not-so-big numbers (by today’s standard) they would influence a match in which they got their act together for even say an hour.”

A Cricket fan has this to say, “Everyone scores runs faster these days. This is more than just “run inflation”, the game’s been increasingly engineered that way. It wasn’t so for most of Tendulkar’s career. So I don’t think the comparison is strictly like with like.

My guess would also be that Tendulkar faced better bowlers, starting with his first ODI, in which he was c Wasim Akram b Waqar Younis for 0.”

As for you the reader, let’s just glance down the list of bowlers from Kohli’s era and imagine if Sachin had to face them in his time!