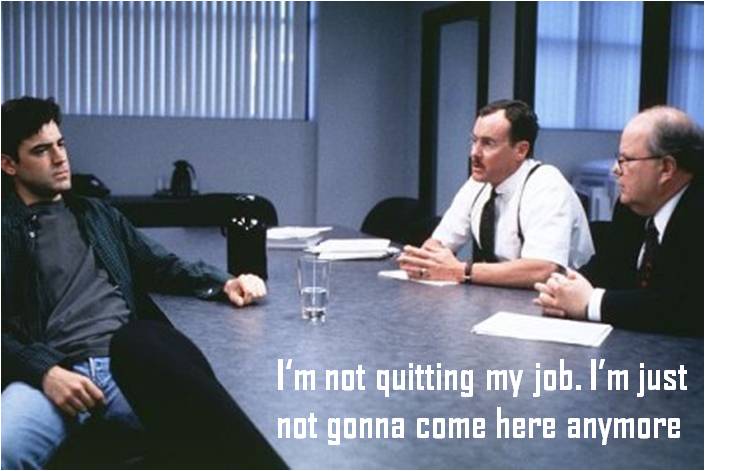 Universal truth is that office sucks. And on Mondays, they suck even more. (Now of course, I am going to get a lot of flak for this from optimists who say that when you have a job you enjoy, office feels like pleasure. But I’m not exactly talking to those charmed creatures!) So for the rest of us, we have our cribs. And that includes encountering Irritants in office. The types you want to tell to shut up but you’re too scared to. The ones who make you want to dive into a bucket of margarita or off a building. But don’t allow yourself to get as excited as I have. Just identify the type, call your besties over in the evening and mimic the type who irritates you most. The winner gets a round of drinks. Reasonably peaceful way I’d say, to end a bad day?

She or he is the type who screams ‘Good Morning’ from ten desks away, even as you’re huffing and puffing your way up the staircase to your desk. The one who wants to know if you’ve had a good weekend and probably is even ‘enthu’ enough to sit down and go ‘ooh’ and ‘aah’ over your boring bhatiji-ki-shaadi weekend details. And then, just as you’re wondering what exotic weed these enthused birds are smoking, they will bring on that chirpy tone and ask ‘So hey, I’ve got some exciting work for you that was needed like well…yesterday?’ And then you know who you want to hit!

They’re like a government advertisement on the ill-effects of smoking and stress. They pace around outside talking about how many deadlines they have to meet, how many Saturdays they will have to sacrifice, how late they go home everyday, how clients want to talk only to them at any odd hour…and the worst part, how much they love their job, despite its pressures. Because you see, they’re saving the world, no less. Just listening to them tires you out. And you you’d never got out of bed.

They’re the sly ones, the little foxes. The ones who want to know who’s having an affair, who has PMS, who’s getting fired, who’s getting promoted, who’s having personal problems, who is out of money, who said what at which party… but don’t have the balls to go and ask anyone directly. However, if you’re telling or you’ve heard someone telling…for sure they want to listen. And chances are, before you’ve said Mrs. Robinson, the gossip is spreading like wildfire. And be warned…such types always start their conversation with ‘Listen, you didn’t hear this from me, but guess what so-and-so has been saying about you?’ Grapevine they call it, or is that grape whine? They got left behind. The bus passed and they were left waiting. And today, all they do is sit on benches and eat their sorrows out. Or pass their time looking at other’s Happy Family pictures. And talk about cousins and nieces and friends and their happy lives with other spinsters, widowers, unhappy singles…anyone who’ll listen. You want to talk with them and often you do. Except, that they can be so boring, you fall asleep with your eyes open, dying for some entertainment and humor. They have no plans, they do nothing particularly interesting and they believe their lives are over. And you just feel very sad.

They claim SRK is on their speed dial, they name drop during lunch hours, they claim to know cops who can get you out of a sticky situation. And these over-confident types will spend hours telling you how valuable they are to the office and how they would do well anywhere, even in NASA. Except, they often find themselves quite lonely. Because really, it’s obnoxious talking to them. However, they’ll laugh loudest at their jokes, make smart-alec comments on everyone and generally be a BBC broadcast on self praise. Leaving you wondering how rotten your luck is.

This is a rare breed. But you know one, when you spot one. They’ll talk less, listen more. Go out for a smoke unobtrusively and speak when spoken to. Crack a joke, once in a while, when you least expect it. And generally feel comfortable about everything – their modest clothes, their modest income, their modest upbringing. If you have any such neighbour at work, believe me you’re blessed. Because very rarely will they interfere with what you do. But in return, expect no small talk or stupid jokes or big favours. The best part? When they do smile at you or your jokes, you know it’s for real.

They know what they want, they know how to get there, they’ve been-there done-that, they’re this, they’re that….and you feel like you’re Orkut in front of a Facebook. Every office gets the 20-something type sometime, usually from a high-profile management school or some la-di-dah foreign university which is why they already have an aura surrounding them when they arrive. They are the types who own the latest gizmos, use the latest apps, can give gyaan on various social media usage and basically have done all the cool stuff you’ve never even heard of. And at any meeting, they’ll be the one to look at you at say that ‘duuuude, that theory is so old-school, what’s your age again!’ line. Enough to make you want to die.

This one is pretty quintessential to any office situation. They are like a Wikipedia on cliched lines. Be it about good friends or life in general or romance or love or tough situations or challenges, they’ll spout quotes that sound like they’ve mugged up Facebook posts and are regurgitating them. They’ll always lend you a shoulder to cry on or a shoulder to pummel when you feel like an Angry Bird. And remain unruffled, thereby adding to your misery. Ah, the Do-Gooders and Positive Thinkers! Forever smiling, forever avoidable.

The Sexy-And-I-Know-It Type: The cute butt, the big rack, the shiny hair, the Figure Ten, the broad shoulders, the pouty lips…every office is blessed to have this type. They make the office worth coming to. And no matter whether they’re your friend or not, just knowing them will make you feel blessed. They’ll sashay past you and people will stop to stare. Or whisper. Or bitch. And you could choose to ignore them, but fact is, the world won’t.

They always rub people the wrong way, because in reality they ARE the boss’ perfect person. The boss always looks at him or her to finish his sentences and often, it’s him or her who gets the meaty assignment or that meaty seminar opportunity in New York. And by virtue of being the boss’ favourite, he or she is doomed. The chamcha, the blind-follower, the ass-licker, the two-faced twit …people will always be unkind. Unfortunately, such people never get called to the coolest parties because then, who will you bitch about?

These are just a few. And I’m sure you guys have an entire collection of ‘office types’ lined up in your own work places. Point is, it’s not good to categorize people but point also is, types exist as do stereotypes and prototypes. So laugh it off, take this article lightly and be the type who can wade through work while surviving the quirks of people.