There are plenty of reasons for anyone to believe that the Bret Hart – Steve Austin rivalry is truly the greatest WWE rivalry of all time. Undiminished by time, their matches seem remarkably fresh and undated, even when revisited after nearly two decades.

This WWE rivalry was what perched the business on the numero uno position and set it off into the Attitude era. If not for Hitman-Austin feud, the McMahon-Austin feud wouldn’t have existed at all (McMahon’s character too was primarily the hate-child of Montreal Screwjob)

So, here are the moments that gave Austin-Hitman feud its adrenaline shot of thrill:

1. The Interview Before Bret’s WWF Comeback

Before they went head to head, toe to toe in the ring, Bret and Austin went mouth burst at each other in an interview hosted by Vince McMahon in his days as an announcer. No brainers here, Steve Austin whipped some serious ass here for being the SOB he is, particularly when Bret Hart’s mic skills are even worse than Hulk Hogan’s in-ring skills.

Well that was a collective sigh-moment for the thousands of fans who turned up to see Bret Hart making a comeback to Madison Square Garden. Unarguably the most underrated match, the Survivor Series ’96 bout between Hitman and Stone Cold was a classic right from the get-go.

Hart and Austin recently revealed how it was supposed to be their only match against each other and thus they gave their everything to it (apparently WM 13 showed that they did not!).

3. The Pile Driver in Austin vs Hart at Survivor Series ‘96

“Both men are fatigued, both men are hurt. This is a WAR.” And war it was! Jim Ross perfectly summed up not just that moment, but the nearly year-lasting rivalry between Austin and Hart. This was an important point in the match where Bret was starting to get some momentum finally after being thrashed to all corners till that point. While the match was not nearly as bloody as their WM 13 street fight, they did dish out some serious punishment to each other.

This is one of my favorites. I mean, how many times will you see Austin truly dreading a wrestler’s walk to the ring, so much so that he had his hands over his head in disbelief. Bret started kicking ass right from the moment he entered that ring.

Bret had turned fully heel by now – at least in America. What became a routine, he used to come out with the other Hart Foundation members who would show their middle finger to fairness and morals as they would cowardly gang up to beat up one guy, talk garbage whenever given a mike, cheat during a match and all the other heel mumbo jumbo.

This time it was no different as Bret duped Austin into believing that he was coming alone to slog it out against him, when in fact he had planned for Owen Hart and the British Bulldog to sneak from behind. The Texas Rattlesnake for being the SOB he is beat the shit out of the Hitman. He did some serious damage to his leg by fixing it between a chair and jumping right on it. This night only fuelled their rivalry.

The roof was coming down at the Canadian Stampede event in Calgary, Alberta.

Come Bret Hart and Steve Austin face to face in the ring and you could hear the arena reverberating. The clothesline Bret delivered to Austin gave a euphoric pleasure-moment to the capacity crowd that was totally behind the Harts. It was pandemonium at Saddledome both teams turned the heat on in the ten-men tag team match. Later, the whole Hart family came up on the stage, evidently to the loudest cheer.

This was another standout moment from the Austin-Hitman rivalry. The following photo is not of that event but does showcase the heat between the two. 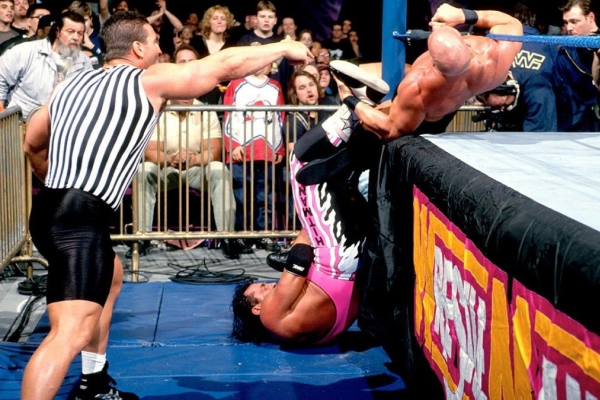 By now, their absolute disdain for each other had turned into pure hatred, and the vicious attack by Bret Hart represents it all most perfectly.

Bret Hart was apparently on a wheelchair, but he wasn’t alone. The whole Hart Foundation was up in arms and duped their way to beating the hell out of Austin, only for Bret to chuck Austin down from about 15 feet to the concrete floor.

Granny of all battles, Bret Hart vs Austin at WM 13 is more thrilling than 5 best Shawn Michaels matches put together. 18 years later, and the sight of Austin, in a bloody pulp, locked in the sharpshooter with relentless Bret Hart holding on to it has become the face of 90s wresting. Hell, this is why the Attitude era existed.

7 Matches Where Bret Hart Took a Lot of Beating