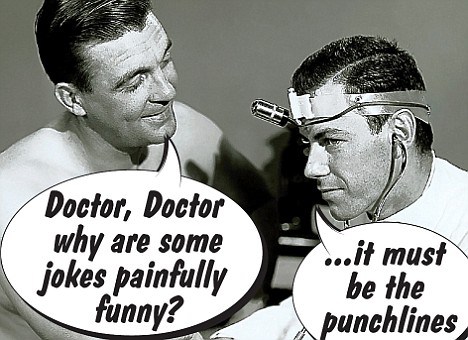 Lame jokes hurt. They hurt twice as much when you are the one shooting them off (only if you realize your iniquity). But, wait a minute, are you wondering why a joke that evoked guffaws from your buddies seemed so bizarrely misplaced at the lunch break chatter with your straight-faced colleagues? Now don’t be such a self-slag, your friends may have genuinely found that joke funny, so what went wrong with the office folks? At various points in our lives, we all are caught up in similar situations. With your sense of humour, you can be one of the popular guys or you’re gonna be the poster-child of lame humour. If you find yourself getting pulled towards the latter, it’s time for some self-search. Why does no one laugh at your jokes anymore? Let’s open the big can of worms:

They Have Heard It Before

You didn’t think you were the first one, did you? Come on, this is the Meme age. The humour-verse is drenched with a steady stream of hilarious and not-so-hillarious jokes scattered around through whatsapp and the likes. Your audience has been there, heard that. Unless yours was an impromptu one liner, which nobody ever saw coming, you would be lucky if they don’t start to slag you.

All said and done, the fact that you are reading this article hints there is still hope, since you realize the pain-in-the-ass you can become if you don’t stop segueing into new lame jokes. For what will remain, but only the remains of your reputation.

They Honestly Didn’t Get It

This is where you can excuse yourself, for the listeners were either dumb, or ignorant or simply uninformed. Let’s say you pulled a joke on the 2007 movie, Mission Istanbul (not many souls on earth have watched it though). The movie, which fashions itself as a real take on the happenings in Afghanistan, is in its bare bones about the hero getting his hands on a pen drive which allegedly has all the secrets of Al Qaeda.  Rest of the movie-time is spent on Al Qaeda’s pursuit of getting that un-encrypted pen drive back so that the secrets are not out. Not for a second does it appear to our hero, who apparently is running all over the globe for his life, that he can copy the contents of the pen drive on ANY computer system he stumbled upon, and hand the pen drive back to the Qaeda guys (who ironically suffer from the same ignorance, since it does not appear to them the our hero might have already saved the pen drive data and sent to to the intelligence through email). Now, as ridiculously funny as the story may sound, how do you expect a person who hardly has an experience with the digital world laugh at this blasphemy?

The Joke ‘Hurt’ Them The agonizing awkwardness will make you wish a dinosaur rose from the ashes and gulped you down. You might consider it just fine to crack a joke around rape, but what if someone in the audience knows someone personally who was at the wrong end of the crime? Aren’t you making them jittery, reminding them of the horrifying tragedy.  How about you  stop finding humor in things which were never funny in the first place. Yeah, lets get back to how we started. So you had a bunch of smart asses around that could grab even the most unrelatable joke in the world. And their recognition in the form of their laughter brought a huge smirk on your face, and to your ego. But has time been kind to the company you preferred to keep? Most likely, no. Whilst back in the college days, slapstick humour, like jokes about a girls’ bosoms bought hi-fives, the same at your workplace will draw stares full of disgust for you. You know, they weren’t joking when they said, ‘mind your company’. They may not make you who your are, but the ‘who you are’ can be influenced by your company.

How about considering the possibility that you may not be a much revered person in the group. Some people, who loathe even at the sight of you, when forced to endure your attempts at grabbing their attention, react as if you asked for their kidney

All said and done, all is not lost and there is a room for improvement. However, if your problem lies in being hated by most around you, why not lay low for a while? (Repeating myself here) For, if you don’t, what will remain, but only the remains of your reputation.

Tags: Bad Jokes, pj, pj's, Reasons Why Nobody Laughs At Your Jokes

5 Best Birthday Experiences For Your Partner Living In Mumbai