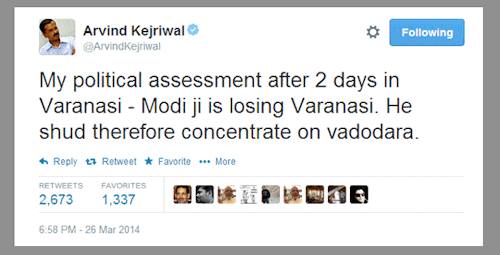 The context in which they were said will only be understood by those who are keeping an account of the recent happenings:

Then there is 50 feet of crap.

And then there is Arvind Kejriwal.”

The rest of the honors go to..

—- That’s wat Kejriwal is gonna say to the results.. word to word, frame to frame!

2. “Another shameless exhibition of hypocrisy by Arvind Kejriwal: He now wants to form Government in Delhi without taking part in fresh polls by seeking support of Congress – And here is the main science of it all (those AAP supporters with zero political acumen won’t understand it):

Kejriwal, after quitting from Delhi, had dragged the Lt Governor to court as he wasn’t dissolving the Delhi assembly. Apparently, Kejriwal wanted fresh polls where he expected AAP to win without any support and that’s what prompted his action.

Now, being a man of righteousness, he has gone to same Governor he was dragging to court and *requested* him not to dissolve the Delhi Assembly. He is wiling to continue that stint with Congress’ support.

And why so? – Because he DOES NOT want fresh elections to take placein Delhi, for obvious reasons.”

3. “To the AAP supporters who believe that Kejriwal’s announcement today tht AAP will take part in fresh polls nullifies the events of yesterday, here is how it works:
Congress withdrew their support to AAP upon hearing that AAP has approached Governer for forming the government and they made it clear yesterday only. And under such a scenario, AAP CANNOT form any govertnment. Kejriwal himself admitted that AAP is unable to form a government and now they HAVE TO go for fresh polls as that is the *last resort*. He and Sisodia spent hours with Governer yesterday to convince him about letting them form a government with the help of Congress. But Congress immediately withdrew the support. And this is not an *opinion* or rumour. This is a fact reported by the same media houses tht u read ur news from.”

4. “AAP makes world record for losing deposit in maximum seats in single election. AAP Loose deposit in 412 seats out of 434

Even if it wasn’t a world record, it’s definitely a figure AAP shud b proud of.”

5. “3.7 lakhs” – the figure is gonna haunt him for the rest of his miserable, RakhiSawant-ian life. 6. “This Kejriwal guy must b seriously pissed. I mean.. sleeping and eating on floor with family (which apparently brought tears to the eyes of his followers), getting slapped by auto wallahs and sabzi wallahs consistently, sitting at dharna all night long during chilly winters, and despite all of this, realizing his partyy is absolutely blanked throughout the country (except for one state) despite being the most talked-about parties of this election. All for nothing! Kumar Vishawas and Shazia Ilmi even failed to get back their security deposit coz they didnt win the MINIMUM no. of votes needed to be refunded that money.”

AND THE FIRST PRIZE GOES TO:

—- That’s wat Kejriwal is gonna say to the results.. word to word, frame to frame!

10 Ridiculous Achievements of AAP You May Have Ignored