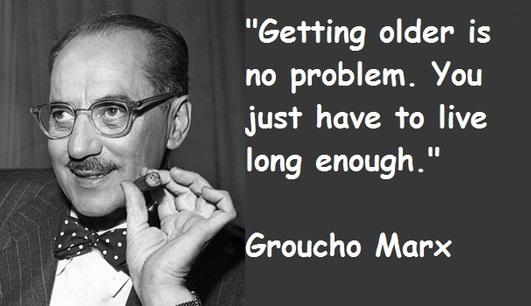 Sobriquets like ‘Hunk’ don’t hold a candle to your copious swagger, but that youth has faded into an Erstwhile dream. Or perhaps, you haven’t woken up to the reality. Check out for these ‘You are aged’ signs, all the while hoping that you find none of them in you: They can pop up from anywhere – the slangs. Blime, Wanker, Shag, fanny are among a thousand other words you have loved to learn and use at one time or the other. Not only they sound hippy, but they let you vent out those feelings in a pretty fuss-free manner. And then comes a point when you start finding such words ludicrous, pointless and lurid. Using bollocks for balls or nosh for food seems such a bizzarely misplaced exercise. Do make sure you hit the panic buttons the next time you say Jack and Julie got ‘married’, instead of saying they ‘hooked up’

Water Becomes Your Most Favourite Drink

One fine day, you wake up to the ‘harmful’ ingredients of cola. Things like gas, fructose, calories, sugar, caramel colour, and all that mambo jambo start making sense. The blood pressure science starts to get to you, and even the most tempting of invites from friends are met with, “Mmm, I’m not sure if I can make it to the party”. At home, you make sure to strip your drinks of all the additives.

The drug stores visits are no longer for Condoms and pregnancy pills, but for Digene,Disprin and anti-depressants

When you were a teenager, the fear of becoming an unplanned father/mother is what coaxed you to go to a chemist. Now that the fathertime is catching up, you complain of headaches, acidity, constipation more frequently than you ever did.

“Technology makes slaves of out of people”

The heap of features on iPhone 5 make you wonder how complex the technology has become, and how it’s turning the ‘younger generation’ into gadget freaks. Conveniently forgetting when as a kid, the new gadgets in the market didn’t let you have a sound sleep unless you bought them for yourself, irrespective of the price tag. The wow features of cell phones used to give your gadgetry senses a huge hard-on. But, that was then. Most drinkers, if not all, at some point in their lives have made a promise to themselves (and to their friends) that they are not going to lay their hands on alcohol. EVER. Not that they don’t fulfill those promises, it’s just that the duration of EVER is changed to suit your crazy alcohol-craving. But does the fulfilling of such promises come to you naturally? Gradually? Get the hint.

When A Friend announces she’s pregnant, you say congratulations, instead of Oh hell! Who’s the father!?

Are You Fluent in Money Slang? Play this Animated Quiz to Know