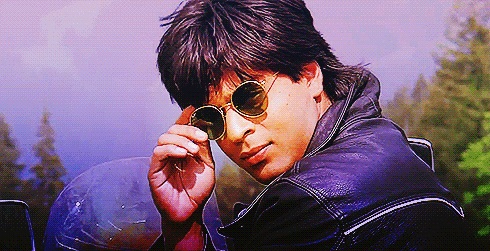 In a career that can hardly boast of great cinematic endeavours, there have been movies & performances where Shahrukh was so good that he stopped being an actor and became a man most of us grew up as or grew up with, writes Rohit Raina

Heartthrob, superstar, and a bloody good actor – all these things coexist happily in Shahrukh Khan, the actor who comes with open arms and romantic monologues blazing.

Shahrukh Khan also happens to be the guy who has inspired just about every star of the current generation to become an actor – the likes of Rajkumar Rao included.

And that ‘in between’ has been filled with ludicrously bad films like Ra.One, KANK, Chalte Chalte – colossally disappointing those who like both, SRK and good cinema! Sure, these movies ‘sell’, but it’s high time SRK gives up on these decrepit excuses for making miserable movies. Entertainment and humor is needed, but in sane doses.

Hold on, I guess you didn’t come hear to read a rant piece on SRK and his worst movies, did you? Yes, crucify me! Even though, I believe we haven’t seen the best of Shahrukh Khan as yet (not consistently enough, at least), there have been performances where Shahrukh was so good that he stopped being an actor and became a man most of us grew up as or grew up around.

If you are on the same page as us and also happen to be a writer interested in movies, write for us. You will know how to get in touch by visiting our lifestyle blog write for us page.

For a lot of fans, nothing beats Shahrukh’s devilish, denatured turn in Yash Chopra’s blockbuster Darr. Give SRK a role that brings out the lunatic in him, and trust him to knock that role out of the park. Too bad, he stopped doing movies that let him stretch his acting muscles like that – so much for the fear of being stereotyped.

The young Veer was just fine, but it’s SRK’s turn as the imprisoned Veer, made old by the tire of time, that makes you sit up and take notice. It is not the first time you see a young actor playing a wrinkled, old person, but few have done it with such a rhythmical charge.

Admit it, somewhere in the corner of your room, under that blanket, you did shed a tear; you rooted for the anti-hero, Sunil, to win his lady love, Anna.

If Baazigar was a story of a young boy consumed in revenge,  Anjaam was a tale of a baleful and love-consumed lunatic burning down the rules of sanity to suit his goddamn crazy, obsessive love-lust. Shahrukh Khan was his delirious best.

Easily Shahrukh Khan’s most underrated performances, Swades and Pardes saw a restrained Shahrukh Khan, coming out of the comfort zone of a lover boy (even though Pardes was a love story) and living the characters as they would live, if alive.

What can be said about Dilwale Dulhaniya Le Jaenge that hasn’t already been said, a movie that has made its way into the hearts of anyone who apparently has a heart and in history! Shahrukh’s Raj allowed himself a love feast, and in the process, created a gift for the not-so-romantic us.

Kaun kambakht bardaasht karne ko peeta hai never gets old. SRK’s Dev grabs you by your heart till you concede.

Make room for Max, the leader of the Eagle gang. The “Maidaan ka yeh baanjoo apun log ka… “ was played on TV day in and day out, and we couldn’t get enough of the biker dude Sharukh doing his stuff with the chain and all the mambo jambo. Though, there were inevitable comparisons with Aamir of Ghulam, there was no denying that SRK played the stylish bad boy ‘Max’ on his own crazy – brilliant – terms.

The appetizing combination Shahrukh-Mani Ratnam didn’t disappoint (it didn’t set the cash registers ringing either). Playing the character of Amarkant like a gathering storm, Shahrukh did not shred his lover boy image to pieces as the  programme executive for the All India Radio, but used it to great effect as there was a lot going on.

Of course, it hasn’t aged that well, and in 2020 you cannot un-see and forgive SRK’s character for doing the worst form of stalking and actually sexually assaulting the girl, but let’s just pretend for a while that it didn’t happen.

Dil Se also was an anti-formulaic flick with songs that elevated the story a few notches higher.

Three signs you are watching a Shahrukh Khan movie: it’s snowing at his character’s introduction, there is a relentlessly loud background score throughout, and the most dramatically cheesy lines are reserved for the always open-armed Rahul. Did you see those signs in Chak de? No. Was that the only reason it was good?  It sure was one of the reasons. Chakde India’s Kabir Khan was the most refreshing role of SRK. Period.

Terrible second and third act. But…

After a decade of worthlessness, since Chak De India, Shahrukh Khan finally gave us what we were so yearning for. A performance that stretches him on his farthest limb and shows us something we haven’t seen before from our King Khan. Gaurav Chandna has left Rahul behind!

Shahrukh Khan is a self-aware superstar who exults being a superstar. And the aforementioned roles are a huge scream to connoisseurs who dismiss SRK as ‘just a superstar.’