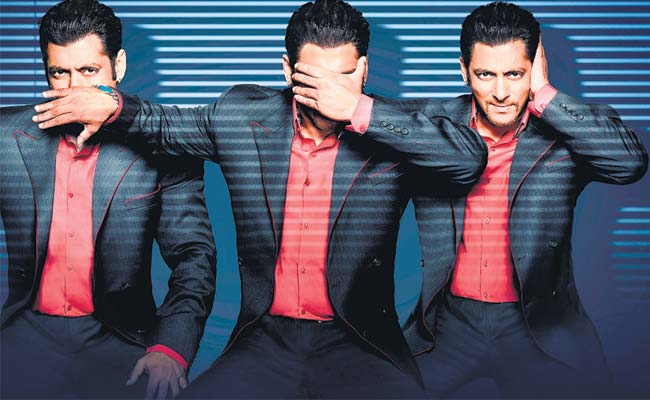 Leave diplomacy, affability at the door. When you are watching Salman, do not expect subdued humour and restraint. Instead, be prepared for a denatured bliss.

His co-stars go gaga over his ‘humane’ nature, dedication to friends, respect to colleagues and all. Newspapers, on the other hand, are rifled with Salman Khan Controversies that go from laughable to grim and tragic.

I say, eff it! I don’t give a hoot to Salman Khan’s personal life. Why should I? Whatever I know of the guy is only through his various avatars on the big and small screen. And I don’t intend to know more. Not even a bit.

Salman Khan As We Know Him

Salman Khan is a bad-ass down to his boots. Some love him for that. Others simple loathe him. For anti-fans, he is a woman-beater, a male chauvinist, even a gangster.  For fans, he is a charmer, a Dabangg one at that. For neutral souls like mine, he is the best thing on TV between November to January! And this is what this article is all about – Salman’s TV stint, particularly his Bigg Boss stint. (As I write this, Salman is ensuing a delightful pandemonium at Star Guild Awards)

Whilst, much has been written about Salman Khan the actor, I was part surprised, part smitten by his skills on television. As much as I get entertained by the goofy and at-times putrid inmates in the Bigg Boss house, I can’t help but anticipate Fridays. Watching Salman for what he truly is, is delightful, even for someone like me who was never quite taken by his on-screen charisma. On Fridays, he gets a screen time of about 30 minutes, and it shouldn’t be a minute shorter.

“Salman Khan as a TV Host? Planet Earth, Swallow Me!”

I still remember back in 2008 when 10 ka Dum’s promos started doing the rounds and I was like, “Salman Khan as a TV Show host?? These guys must be doped!” The ‘Hero’ Salman Khan I had come to know was a zero without script. The painfully fake accent in his interviews screamed out loud his wannabe-ism. Promos seemed no different. And then the show started…

Whilst 10 Ka Dum may not have glued whole nation to their TV sets, it sure did showcase a different side to Salman Khan. However, before you knew, the show was over. And then in 2010 (if my memory serves me right), Bigg Boss brought Salman Khan back to the Indian Television. Little did they know, they would stick with him for a show which had already seen 4 anchors for 4 seasons. It’s not hard to know why though.

Let’s face it, the best celebrity hosts on TV – be it Shekhar Suman or Amitabh Bachchan – can’t help but bring their acting skills on small screen. Not that we don’t like it – rather they are masters at what they do – but nothing beats when you are the raw you, and darn entertaining at that. Salman Khan doesn’t give you a vibe that he has come prepared. And he does deliver a knockout!

What Separates Salman from the Rest

A fearless anchor, Salman goes unbridled with his loopy-ness. He has an audacious attitude with a gunmetal persona and a quicksilver spirit ready to thaw the people out of their comfort zone. And it’s fascinating to watch it all happen.

For blatancy, the man can’t be beat, nor for wits. Salman’s demeanour on the show has a bare-knuckled effect that is both infectious and offensive. Imagine how out of place he would look if he appears all too nice and diplomatic with the Bigg Boss participants, ‘respecting’ them, talking ever-so gently and politely. Naah, that’s not Salman Khan. Wake up, people. Salman Khan lives to cross the line. Is his demeanour reckless? Damn straight. It wouldn’t be Salman otherwise!

The flaws are forgiven because they are the consequence of a go-for-broke attitude. Leave diplomacy, affability at the door. When you are watching Salman, do not expect subdued humour and restraint, instead, be prepared for a kind of denatured bliss.

Animal Prints for the Wild and Free