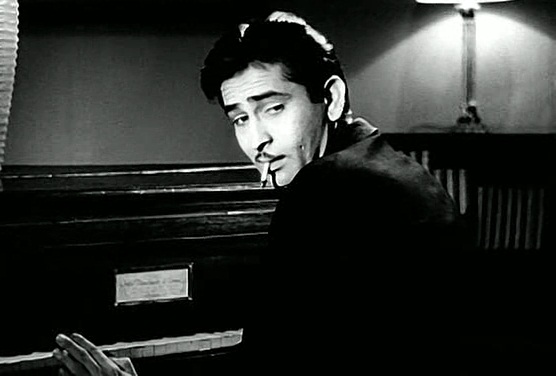 While Raj Kapoor’s aplomb and lyrical theatricality summon comparisons to the other superstars of his era, he outstripped them all in mature application and versatility, writes Rohit Raina

I always had a bone to pick with Raj Kapoor’s detractors, particularly the seasoned professionals claiming to be erudite in Indian cinema. Entitled to our opinions we are, but not at the cost of facts. I have only one question that’s been troubling me for a while :

Do the people – for whom Raj Kapoor was just a Chaplinsque tramp who made a career imitating Chaplin – know that out of 70 odd films RK acted in, he played a tramp in not more than five? And not even one of those roles, in the truest sense, can be ranked among his very best.

TV made sure that all the Raj Kapoor staple my generation has grown up on is merely fed from movies like Mera Naam Joker and Sangam.  These are cults, no two ways about that, but they only reaffirmed his image as *just a tramp*.

In a land where legends are mocked for their trademark affectations, Raj Kapoor hardly had any (at least not something that evoked mockery), yet, he has been stamped by the tag of ‘Tramp’ – something which didn’t seem to bother even him, ironically.

More I see him perform, more I want to see him perform. To me, Raj Kapoor was a monument of acting who had an ensemble of expressions for any kind of situation.

While Raj Kapoor’s aplomb and lyrical theatricality summon comparisons to his rivals like Dilip Kumar and Dev Anand, he outstripped both actors in mature application and versatility. As an actor, Raj Kapoor was much beyond the afore-mentioned movies. And here are a few performances that make me believe and thereby claim that:

In the dark, mystified Phir Subha Hogi, Raj Kapoor was a busy actor. In his – and the Indian cinema’s – one of the finest performances ever, Raj Kapoor plays a man consumed by guilt and fear, to the point of sublimity.

For a change, Raj wasn’t challenging the system for the prevalent unemployment and corruption issues, though that does form the backdrop. Yes, he was impoverished, unemployed and wanted to save his ladylove from getting married to someone else. But in his desperation, he murdered the person he planned to steal money from, and thus in one swoop ended all the predictability of the plot.

Portraying a 24 hour angst, Kapoor’s performance plugs you right into the psyche of a man  fighting his inner demons. In a particular scene when he goes to a lala to ask for money for his university fees, Raj Kapoor aesthetically conjures up anger and plight– ever so  effortlessly – and keeps you rapt to the screen.

Raj Kapoor’s was a perfectly nuanced performance, yet deep-felt and passionate. There was no trace of maudlin impulses. This was probably the toughest role of his career which required him to shed – and shred – his tramp persona absolutely, completely. Did he succeed? Damn straight.

Jagte Raho – a masterpiece in every sense of the word – is immersive. The concept of a movie based on the events of one night has always sounded intriguing, and with its director’s devotion to follow any situation to its valid conclusion, Jagte Raho doesn’t let you down. It is a satire that nails exactly where it is supposed to. That, and the acting and, you have a winner in your hands.

The movie is about a poor peasant who comes to town and at the wee hours of midnight, enters the ‘Janta Flats’ only to quench his thirst. Soon, he is denounced as a thief by the residents who chase him like madmen. With his haunting eyes, he masterly grasps you.

In his measured portrayal of a naive and innocent peasant running for his life while uncovering the filthy lucre of the society, Raj Kapoor was both resonant, and heartbreaking. The movie meanwhile is not your average satire drenched in sarcasm, rather, it relies on heart-rending and vexatious emotions of a man who isn’t able to come to terms with the hypocrisy of what you call, a society.

Was Jagte Raho flawless? Maybe. Was it Raj Kapoor’s best performance? No (that’s still got to be Phir Subha Hogi). Should it be watched? Definitely. Rarely you see inventive direction and impeccable acting come in one package, and when something along that line does knock at the doors, you got to endorse it.

Road-trip stories have been filmed many a times, but never with such a rhythmical charge. And Raj Kapoor is magisterial and majestic as the naïve bullock cart driver, Heeraman. The story: Heeraman is paid to take a nautanki dancer Heerabai (played by the most excellent Waheeda Rehman) to a town where locals are dying to see her perform. While Heeraman narrates the local legends and sings some beautiful songs, you get transported to their journey without needing a time machine. The moments during and after this journey are drenched in amour and a touch of heartbreak. Yet, there is not single shred of melodrama.

Stills of Raj Kapoor from Andaz (1949) and other movies

Raj Kapoor’s acting took his characters away from theatrics and perched him ten steps ahead of his fastest peers. He gave us so many finely crafted performances, and though in contradiction with my top 3, but it’s worth mentioning that the Times magazine has ranked his performance in Awaara as one of the top ten greatest performances of all time in world cinema.

What do you say to that!