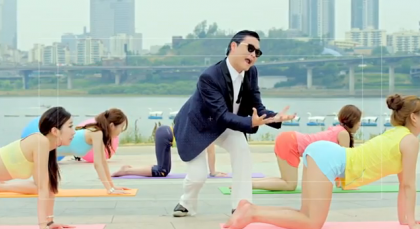 It’s official – Gangnam style is cosmopolitan in every sense! Obviously, the ‘Psy’ sing and dance style needs no introduction.

In a five word sentence: It’s a complete entertainment package. The world is so *into* it for more than conceivable reasons. Even though I write of it quite late in the day (literally), I write of it with a heightened level of interest.

So when I saw James Hahn’s Gangnam style at the Phoenix open – I was flabbergasted, I was numb, I was elated. Believe me I still am. It was like the return of Gangnam! On second thoughts, did the inimitable ever leave us to the maroon and mundane? Whoever claims that the Psy style is no more than a one hit wonder simply fails to look further (and around).

Forget the 1 billion Youtube hits and think about the 7-month-old toddler who is all ears for the catchy Pop song. Yes, forget the Obama Vs. Romney Debate “Gangnam Style” and think about the simple innovations that the cult has inspired in blogging. FORGET the hype that surrounds it and for once sink in its leisurely pace. Isn’t it tantalizingly ticklish?

Without much argument, ‘Wupup Gangnam Style” is definitely not the best video in the “funny watches” category. Nonetheless, without much ado, it is the only to have permeated every aspect of our life. The internet is literally oozing with it. Pouring from every orifice of social media and sinking into every “hot” affair, Gangnam style is an instant energizer. It’s like a doze of endorphin bringing you a rush of happiness (Warning: Effective in getting out all the crankiness hiding below that mask of erudition. Be careful while watching Gangnam in office, where unfortunately you need it the most). Played in every bar, in every soccer match, in every club or café that you can ever imagine, Gangnam has become a way of life. That said, I am forced to meditate into a deeper purpose of Gangnam.

No two ways about it that the cult rage has traveled to the deepest veins of absurdity. But if I tell you that it has seeped even deeper into philosophy and spirituality, don’t be shocked. For a lack of better explanation, spiritual gurus exclaim that Gangnam is the perfect summation of randomness. They talk of it as the same randomness that life brings with it. Both make no sense. They were never meant to make any sense. But looking at the sheer madness of the style one can tell that it is THE anecdote for attaining moksha. I don’t know whether there is any future for PSY but one thing is for sure, the kick in Gangnam is enough for smokers to quit smoking and start inhaling the PSY-dope!

7 Life Lessons You Can Learn at Unexpected Times

The Promise of the Last Scenes

Oye! Not this Way!