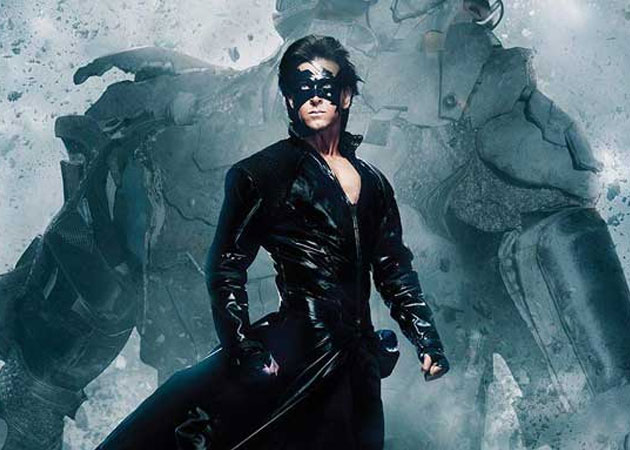 So, the year’s biggest film,Krrish 3 has finally made its way to the theatres. Here is what the critics have to say: I am all for a sculpted physique but his needless display of god-knows-how-many-packs torso made me nauseous. Extending the same goodwill with which he explains to a little boy not to try dangerous stunts at home, I’d advise HR to go easy on the gym. It’s not original. It’s not subtle. What Krrish 3 is is astonishingly eager to entertain with its stock of doodads that should amuse if not endear.

Krrish 3 is an entertaining mix of spectacle and human-scale drama. Roshan combines his imagination and flair to deliver a film that is sure to capture everyone’s imagination. It has something for everybody. For a superhero film fan there are fantasy characters, a super villain, full scale heroism, plot twists and superb action.

For a Bollywood fan, there is enough emotion, drama, love story and songs. For the bachchaparty there are plenty of exciting and exhilarating moments. The film is fast-paced, the effects are smashing, and what works is that Krrish is engaging and endearing even when he is is out of costume.

The superhero swings into action, uses the city’s skyscrapers as stepping stones to propel himself forward and upwards as he guides the aircraft to safety. The sequence sets the tone for the film and there is much more of the same as the action heats up. It is quite another matter that Krrish 3 remains largely soulless, devoid of emotional energy and hopelessly trapped in excess.What Krrish 3 gets absolutely right are the characters of the principal antagonist and his female trouble-shooter, who together create the grand context for Krrish’s war.

Superheroes have been around in Hindi cinema for decades, but huge technology jumps have made ‘Krrish 3’ the slickest of them all, special effects-wise. The rest of it is marred by tackiness. When Krrish is doing his derring-do stunts, we watch, even if we’ve seen Superman do this 30 years ago. But when he delivers maudlin dialogue about fathers and mothers and bravery, we are pulled back to the ground with a thud, with the superhero the Roshans made.

Hrithik is the perfect choice amongst the Bollywood superstar lot to do this role. With his superbly articulated chest, each muscle moving and shiny and oiled, Krrish doesn’t even need a mask and a cape. But the ensemble is eye-catching, and we ignore his immaculately-styled long hair, flying in the wind, when he is whizzing about rescuing little boys. Roshan Jr is as likeable and earnest as he usually is, but can’t rise above the mothballed treatment. Roshan Sr, who has written and directed, should have given the superhero more to do.