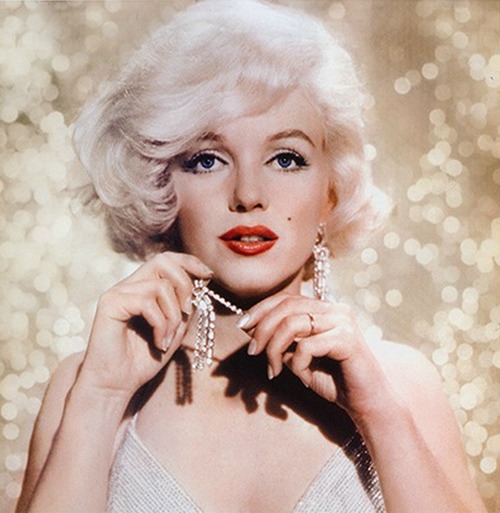 Her platinum blonde locks and svelte guise was never an obsession for her, and for me. Why else would I describe the starlet’s persona in a downright inglorious manner!

I wish to write nothing about her perfect porcelain skin or her succulent red lips (even thought not conceding that she is the only one till date who wore that striking shimmer paint correctly would be disgraceful).

Alright, let me make a clean breast – I have been of late mildly obsessed with her picture perfect façade. You know when they say how they say; and, I just felt a little drive to notice Monroe’s size 4 yet seductively curvy figure.

How did she manage to seduce the camera? What was SO magical about her? Did she even have style? Turns out she had all that and much more that she was not shy flaunting. Of course, there are a million others today who have it all and will bare it all.  The difference (in her words) “I don’t want to make money, I just want to be wonderful!” would you believe it if those words came from any of the contemporaries?

Marylin had many faces – all of them pretty. Some know her as the frivolous blonde; others knew her as an orphan.Some remember her as the most celebrated actress and many as a sex symbol. A little about her movies – she had to her credit the most offbeat one’s that somehow went with her persona.

There was nothing lackluster about her; how could it be then about her movies. “Some Like it Hot”, “Gentlemen Prefer Blondes”, “Monkey Business”, Let’s Make it Legal”, “As Young As You feel” and she has many more to her credit. One common thing about all – she was the protagonist! Back then you always emerged as a hero – not just an on-screen one, but behind the shoddy curtains as well. Monroe was one – by fate as well as by choice.

My favorite Monroe, however, was the brave heart. Born as Norma Jeane Mortenson to a mother who was a flimcutter hopelessly ill, Norma was almost smothered to death at the age of two. Grimmer still, she was raped at six and employed at nine. Sixteen and married; thereafter, divorced. By the time she entered womanhood she had experienced it all. She had two ways to choose – the world’s way or her way. She picked the later (Thankfully)! In her twenties, she was a bookworm (she owned 200 of those paperback ones) and a diehard Beethovan fan. At 22, she was picked up by Columbia to act. An unabashed and unafraid Monroe underwent psychoanalysis to know herself. She indeed knew nothing of herself. Or perhaps she knew too much.

They say she was a cynic. Really? Wasn’t she a perfect cynic that way? Arthur Miller, in his biography of Marilyn Monroe, quoted, “To have survived, she would have had to be either more cynical or even further from reality than she was. Instead, she was a poet on a street corner trying to recite to a crowd pulling at her clothes.” The curtain drew upon her at a very prime age. She bid the world good bye without knowing an impact of her being a part of it. We know what you would have said Monroe “It’s all make believe, isn’t it?”.

Get That Perfect Pout with The Right Lipper For You

At the Sight of Love

How to Give Your Finances a Makeover