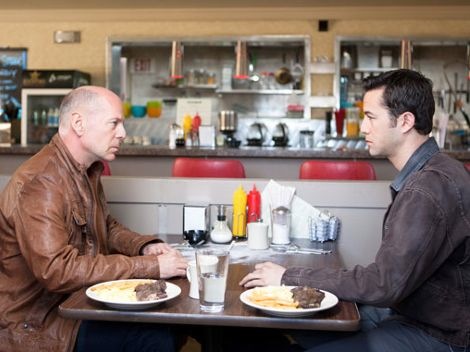 There is a certain urgency to Looper that you will not notice  until the first ten minutes of the movie have lapsed. Till then, all the confusion and the initial inhibitions will settle down. And then, you will experience a phenomenon that over the time, has disseminated in meaning – At one fell swoop.

Looper gets you back to your senses. With a bold and brilliant initial premise, it charms into the world of sci-fi and then slowly pushes you back to the reality. Here is a blatant truth about time-travel: it seems so surreal a subject that we often forget what it could be.

Looper WALKS us through these other possibilities, other realms. FINALLY, time-travel makes sense (‘Not everything  seems logical though).

Now that you are in the groove to gulp down the thrilling confusion you notice the spasms of satire strewn in bits all across its plot. When I say blunderbuss, you’ll get the idea! The shotgun is a total package – an awe inspiring weapon, but one with an uncommitted demeanor. The Blunderbuss is a smooth comparison to the Looper’s serendipity – or at least you can look at it that way. Set in 2044 somewhere in Kansas, Rian Johnson’s Looper doesn’t fail to amuse even for a second. As Jordan Gordon-Levitt and Bruce Willis play the same character in younger and older skin, you don’t catch yourself flinch an eye just to see what prowls around next on the space-time continuum.

All said, let’s talk a bit about the plot – its genius and its loopholes. In its simplest the movie is about a mob that formulates a kill system whereby they send future victims back in time to be eliminated by hitman known as (obviously) Loopers. So there is this young, cold, efficient Looper Joe who does his job extremely finely. He collects the silver from the victim’s back like a junkie on hash. This goes on till the Looper finds gild instead of silver (an ironical signifier of the fact that the victim is the Looper from the future)! Joe is no exception – so how does he bring it all to an unpredictable end…or a refreshing start.

Hoping back into the immediate past of this review let me tell you when time-travel creeps into your nerves and becomes a subtle sorority. It’s that very moment when “time-travel is invented 30 years later, in 2074, and outlawed instantly.” From that instant you see Joe (Joseph Gordon-Levitt) play an efficient hitman who is well-versed with the practices of the mob. Everyone in the mob knows how their end will draw. Nonetheless, everyone kills and lives, till one day their Loop has to be closed. Like time they cannot defy time travel. But can they trick time? If only they realize the essence – that the path was circle. And that the loop will go on if you don’t end it with yourself “in time”!

Reasons Why We Should Rejoice Twilight is Over