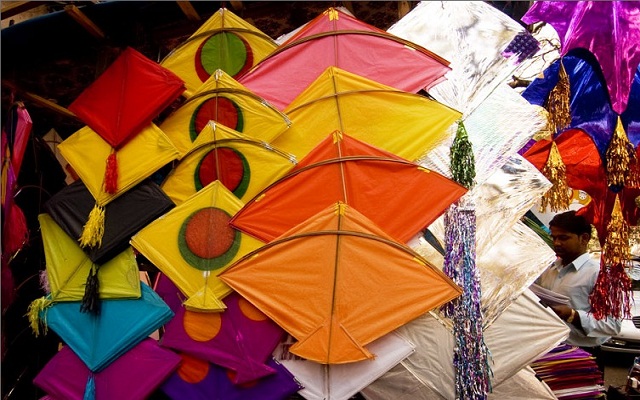 An excited 10-year old goes up to the terrace with his father who had got him kites. He is excited.
‘Papa I will fly the kite naa?’
‘Yes you will’
‘I like the kite floating in the air as if dancing to a tune, will my kite also dance’
‘As much as you want’ His father does the preliminary job, fly the kite, so that it reaches the sky where there’s less traffic of the competitor kites. His son doesn’t like fighting, neither with the kites. He wanted just to let it dance as he directs with his hand. He’s overjoyed, he feels at peace during this little exercise, when another kite zooms past his kite in a second which makes his hand feel no pressure of the kite.
‘Aibo Kaate’ is heard in the background. Son starts to cry. He didn’t want any violence up there in sky. He’d got his Tri-color kite which he was enjoying watching up in the sky.

‘Can you teach me how to cut all those flying kites?’
‘I can just let you fly another one’.
‘No, it will be gone again unless I try to remove those who come in my way’.
‘You will learn that with time, son’.