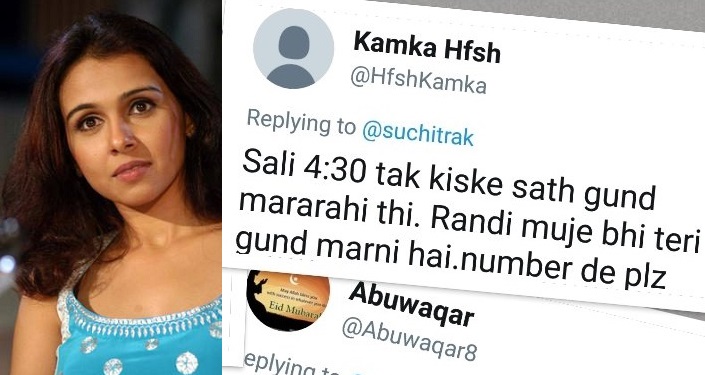 Suchitra Krishnamoorthi is getting her taste of what it feels like being an opinionated woman in India. I’m sure this is not her first time though. So, she tweeted this after being disturbed yet again by Azaan at 5 in the morning, and Sonu Nigam Part 2 ensued.

came home at 4.45 am 2 most aggressive/ ear shattering call of azaan. Nothing more lowlife & dumb than such extreme imposed religiousity

Sample some of the replies she got for a perfectly valid point she made:

heres another one. pathetic https://t.co/SoVskX88eY

More for your eyes

Look at these perverts! Feel sorry for my India -with this kind of attitude towards women its no wonder we've become rape capital of d world pic.twitter.com/Hteg0IXRM8

Appreciatively, she is getting tons of support by people on the same medium, but not enough from the people who influence opinions. The scholars in India, the intellects, the so called feminists who give every incident a religious or gender colour, even if the incident has nothing to do with either, are known to be apologists for Islamic extremists. So, it’s hardly a surprise that virtually no one from India’s intellectual factory has spoken in favor of Suchitra Krishnamoorthi. They are waiting for someone to be victimized at the hands of people who just happen to be Hindus.

But Suchitra Krishnamoorthy’s case is not the only one

Irrfan Pathan posted the following picture and the custodians of his religion saw it nothing less than blasphemous. This is how people thrashed him: Barksha Dutt, in her defense of Islamic extremist, was quick to dug up a 6 year old article of Sangh parivar issuing a diktat around how some universities should have a dress code. This was a blatant attempt to distract attention away from the incident and instead focus on something that reflects poorly on Hindu extremists. Sure, no form of extremism is good, but why do these intellectuals exhibit so much bias – outrage over Hindu extremism and apologist attitude for Islamic extremism.