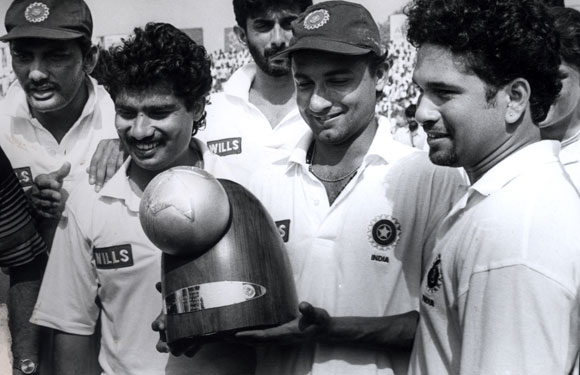 No matter what English would like you to believe, India vs. Australia rivalry has to be right there with Ashes – perhaps a more anticipated one. How else would you explain the fact that out of the last 41 tests played between the nations, a staggering 34 matches have given a result and only 7 have ended in draw. That is a jaw dropping figure considering draw used to be most likely result of the Test matches, at least till the 90s.

Warm Up: One of the most nihilistic rivalries in the history of Cricket didn’t start with a bang. The first installment of the trophy was just a one-off match where Nayan Mongia starred with his maiden century.

Player of the Series: Nayan Mongia

Bang! Here is how it all started! This series sure was the kickoff the nihilistic rivalry between India and Australia. There was a huge hype going into it, as both teams were considered an even match. But somewhere in the middle of all that, a gigantic battle was brewing up.

Sachin Tendulkar Vs Shane Warne is what this series was billed as. I was about to give my 7th grade exams when newspapers, full of the“who will come out on top” stuff made it hard to concentrate on studies! But was all that worth it? Damn straight!

Sachin Tendulkar’s knocks were the stuff dreams are made of. He played just fine to give Shane Warne his doses of nightmares. Plenty.

Player of the Series: Sachin Tendulkar

Nightmare for India. Sachin battled hard as team’s best batsman and captain, but all his effort went in vain. There was a silver lining though – Laxman’s gritty 167. And a legend was born!

Player of the Series: Sachin Tendulkar (Even after India were drubbed 3-0) This installment of Border-Gavaskar trophy can very well be labeled as Laxman-Dravid trophy! How many times you see that – a team being inflicted follow-on after trailing by 271 runs, and by the end of the match, the same team wins by 171 runs. Records came tumbling down as Laxman and Dravid kept conquering frontiers. This is when India came of age. Winning abroad was a luxury, and winning in Australia was an outrageous fantasy. But only till Dada’s XI decided to go against the script! Sourav Ganguly blasted a century in the first test, sending out a message to his colleges that there are no demons on Australian soil. Laxman-Dravid produced another superlative partnership to give India a lead in the second test against Steve Waugh’s men. Though they lost the next one, the enormously gritty Sachin Tendulkar’s double hundred almost won the series for India.

Player of the Series: Rahul Dravid Last frontier was conquered! We don’t know what happened, why Ganguly and Harbhajan decided not to play in Nagpur (‘Greentrackitis’ is what they were suffering from, I heard). Though India did end up winning miraculously the last test, Ricky Ponting’s men had already conquered the final frontier.

Player of the Series: Damien Martyn Sydney-Gate and Bloody Good Cricket: Whilst, this series would always be remembered for the events that unfolded in Sydney, there is no denying the fact that this installment would easily rate amongst the best-fought of Border-Gavaskar trophies. If Sydney left a bad taste in the mouths of Indian supporters, an unimaginable, unfathomable victory on the bounciest track in the world, WACA, Perth was sweet. 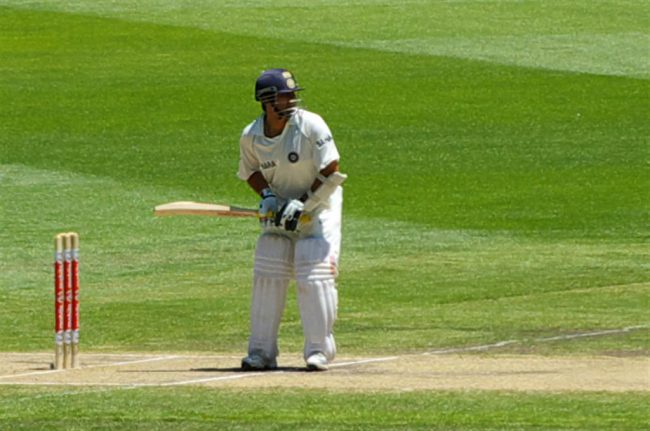 Player of the Series: Brett Lee

Revenge and Redemption: Sachin Tendulkar was at the cusp of overtaking Lara and Sydney-gate memories were still afresh. You didn’t need more motivation! Sachin came good with two hundreds and Ishant Sharma, carrying from his good showing in Australia, gave Aus batsmen many a headaches.

Player of the Series: Ishant Sharma

Sachin Tendulkar Series: No overstatement this one! Sachin carried on his excellent form into the series and smashed a double hundred. He took India home in the last test, as completed the first whitewash of Australia (without a single draw match)

Player of the Series: Sachin Tendulkar Revenge and Redemption Part II: Nightmare. Dhoni’s men went from bad to worse in a series where fortunes never seemed to be swinging. India was on a downhill throughout.

Player of the  Series: Michael Clarke

Youngistan: Cynics might argue it was a young and weak Australian side. But weren’t the top performers in hew Indian team all young and inexperienced as well? It is a shame that w will pounce on the team at every match given away, but won’t credit them for beating Australia.

Player of the Series: Ashwin Sharma

The India-Australia cricket rivalry will always be remembered as one of the most iconic battles ever witnessed in Cricket, and judging by the way Cricket has been played between the two countries in last 20 years, things are only going closer to the edge.

Australia won the series 2-0, and regained the Border-Gavaskar trophy, with some stellar performances from both sides.

India completed their seventh title of Border-Gavaskar trophy by winning the series 2-1.

India won the 4-match series 2–1, with Cheteshwar Pujara being the highest scorer of the series and Jasprit Bumrah and Nathan Lyon sharing the leading wicket taker honors.