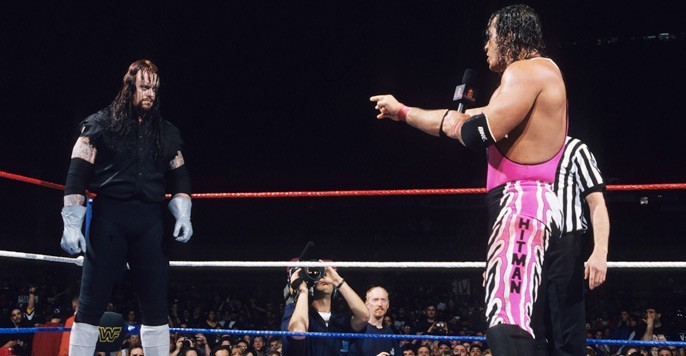 WWE has had a studded list of legends over half a century now. But few hold candle to the WWE superstar we call The Phenom.

So, when the news of Mark Calaway’s documentary – aptly named ‘The Last Ride’ – by WWE Network broke, WWE and Undertaker fans of at least 4 generations lost their minds.

The Last Ride unravels the side of The Undertaker we have never known. Mark Calaway has pretty much lived his character of the mysterious and creepy Dead Man Undertaker for 30 years now. In these 30 years, there have been at least a thousand dozen stories that have done the rounds in fan circles – starting from The Undertaker lives in caves, he gets his energy from a golden urn, and so on.

Unsurprisingly, we the fans wanted to know Mark Calaway beyond The Undertaker. So, here we are. Being released in chapters, The Last Ride has so far been a massive hit with the audience.

The Bret ‘Hitman’ Hart and The Undertaker Connection

Something about the documentary that recently caught the attention of even more fans was a bonus feature wherein The Undertaker basically lists down 6 of his greatest opponents. There are some expected names in there and some surprises.

For the fans of Bret The Hitman Hart, though, we wouldn’t have asked for more. The Undertaker starts off his list with the 5-time WWF Champion Bret The Hitman Hart, describing him as his favorite wrestler and “as smooth as silk.” He goes on to say that Bret Hart always looked good and always raised the bar.

Now, if you are wondering how many more great matches did these 2 legends fought with each other, let me tell you, there were way too many to keep the count.

However, one match that often gets overlooked but is in fact at least thrice as better as their encounter at Summerslam 1997 is:

Bret Hart vs The Undertaker, One Night Only in 1997

The seesaw match they had that night was Bret Hart’s last great match in WWE, and was included in his documentary as one of Bret’s personal favorites. It’s a long match with not a single drag moment anywhere. Its pacing is complemented by the unmatched skills and bravura of The Excellence of Execution Bret Hart and The Phenom Undertaker.

And if you haven’t watched their Summerslam match, here you go.

Bret Hart vs The Undertaker at Summerslam 1997

There are some rare and unseen and unheard of matches that took place between Bret Hart and Undertaker. Like this one at MSG.

Bret The Hitman Hart vs The Undertaker at Madison Square Garden, 1992

Bret Hart and The Undertaker also clashed in 1996 in a couple of matches.

Undertaker was fighting from behind a mask during this time. But who else than Bret Hart to rip that mask and The Undertaker apart.

Bret Hart vs The Undertaker at WWF Raw 1996

Here’s another classic between Hart and undertaker that many fans, even the hardcore ones of both the wrestlers, don’t know of.

Like their other matches, this match can also hold its own against any match.

Now, here’s the rarest Undertaker, Bret Hart and Shawn Michaels match that nearly know one ever came to know about, except those in attendance on a Raw night of 1997.

Well, well, well, for all the fans who love Bret Hart and Undertaker both, I hope this article has really taken you down the memory lane.

Here some more Bret Hart for you:

10 Reasons to be a Bret The Hitman Hart Fan

Bret ‘The Hitman’ Hart – The Excellence of Execution

if you’ve liked, please comment and share with your friends through social media or howsoever you want.