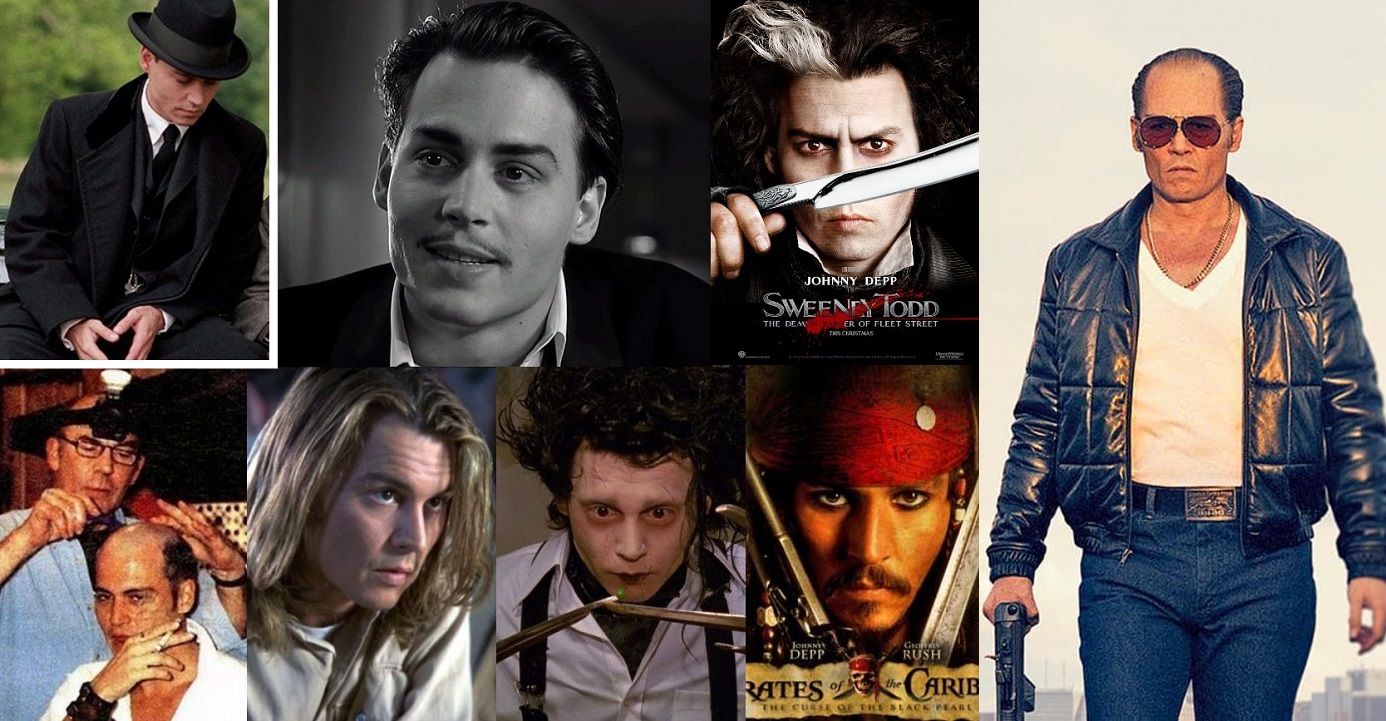 The word ‘popular’ doesn’t lend a candle to the Johnny Depp aura. This immensely talented and never-afraid-to-experiment actor has already achieved the status of a legend, and as the time passes by, the legend of this legend keeps on growing. No surprises that he has been part of many of the best movies since 1990.

To further recite homilies – there are two kinds of actors in the world – Johnny Depp, and the rest of them! A real master of disguise, this masterly actor plays all his characters in his inimitably unique style. The best or even the worst performances of Johnny Depp have no analogues at all, and you will never see the same Johnny Depp in two movies: he is always different and sometimes, even impossible to recognize. Such a talent is a great example of what a real actor should look like and behave.

Johnny Depp is not only an actor, but a producer and a musician as well. Anyway, we all know and love him for his awesome performances, at least 8 of which can be called epic. Some of them brought Johnny Oscar nominations, and many other awards , including the Golden Globe.

While the last few years of the actor haven’t been quite blazing from the professional point of view, the pre-Sweeney Todd era has been most fulfilling for the legions of his fans worldwide. So I’ll just start this list from thereon and then go backwards.

Here are 5 of the best Johnny Depp performances in special movies:

A knockout for sure! Johnny Depp was frigging awesome as the man consumed by revenge. The movie was directed by Tim Burton, the man behind the lens for some of the very best work done by Depp. Helena Bonham Carter and Alan Rickman played the ideal foil to Depp.

Johnny Depp’s character, Benjamin Barker, is the owner of a barber shop who took a name, Sweeney Todd, after his coming back to the native city of London for revenge. Another Oscar nomination for Johnny, and another brilliant movie based on the popular Broadway musical – a perfect chance to see Depp singing.

The movie also boasts of some wonderfully made sets that depicted the old world charm in its own dark, scary way.

This one is easily the most underrated performance of Depp’s career (and I say that knowing it was nominated for Oscars). In a career glorified by the Pirates of Caribbean mis-adventures, Finding Neverland shows a different side of Depp and puts him opposite another modern day legend Kate Winslet. Together, they create magic on screen, keeping up with Peter Parker who creates magic with his stories.

Talking of Peter Pan, do you know where the legend of Peter Pan came from? Just watch this 2004 sleeper hit by Marc Forster and Johnny Depp will reveal all secrets of this story through his character J.M. Barrie. His friendship with a loving family inspired Mr. Barrie to write the story of a boy who never grows up.

Johnny Depp’s performance in Finding Neverland earned him his second Oscar nomination, and though he did not take home the trophy, we still found his James Barrie one of the best and most endearing performances of this incredibly talented actor. Do note that Depp had already started navigating the Pirates territory of Jack Sparrow by now.

Are you surprised that Tim Burton’s name appears for the third time? I wager not. This legendary director is responsible for bringing the best out of Depp and Ed Wood was no different. Based on a man who is officially considered the worst film director of all times, Ed Wood is filled with eerie characters who in their own way amuse and scare you.

As always, Depp gets under the skin of his character and delivers a crazy performance with great ease and effect.

Johnny Depp personally met the man whose life inspired this movie for getting a better understanding of the role he was supposed to play. George Jung was a well-known drug lord in the 1970’s, who established the whole cocaine market in America. He is serving a life sentence in prison currently. Johnny was able to show us Jung’s personality, his worries and fears, his attitude to his parents, wife and daughter, etc.

Watching Blow, we don’t see an evil and powerful drug dealer, but a man who can evoke sympathy and compassion. While much of that credit goes to the team of writers (Bruce Porter – book and David McKenna – screenplay) and director (Ted Demme), it wouldn’t have been the same in the hands of a lesser actor.

Who doesn’t know Jack Sparrow! Oh, sorry… Captain Jack Sparrow. This performance got Johnny Depp his first Oscar’s nomination (still boils my blood that he had to wait for over 15 years for that, despite a string of some of the greatest performances and roles before this film), and one must admit, he deserved it. Amazing charisma, sense of humor, ability to deal with all problems with an enormous optimism –  these are the qualities we all love Jack Sparrow for. It must be mentioned that it was Johnny Depp who created this character the way we know and admire: he worked on Jack Sparrow’s style, jokes, goings-on, and frills. So, thank you, Johnny, for such a character, the only one of that kind!

Wasn’t he a cute little thing in this tragedy! Another gem by Tim Burton, Edward Scissorhands was Johnny Depp’s shot to fame and got the best in him out there on the celluloid, making him stretch his acting muscles. The movie was a massive hit among masses and is still considered one of the finest works by Depp. Girls still swoon over this avatar of Depp with scissor hands.

This was the first time in 8 years that a Johnny Depp movie truly got me excited. After a decade of worthlessness, this is truly something from the Johnny Depp factory that we can relish and cherish. The fact that Depp didn’t even get nominated for Black Mass at the Oscars is a grievance to be shared another day. Playing the bad-ass-down-to-his-boots Whitey Bulger on screen, Johnny Depp burnt his way into our head with his sinister portrayal.

Black Mass also served as a reminder of how good Depp is in portraying serious, intense roles. I struggle to understand why he has been relegated to playing the goofy, old guy since nearly all his movies in the 21st century. The Jack Sparrow effect?

When you start watching this movie, you might not recognize Johnny Depp at once. I have personally heard friends – not big on Hollywood – saying they couldn’t even figure it was Johnny Depp 40 minutes into the movie . His ability to transform into an odd journalist who doesn’t mind to try light drugs and travels with his really awkward and even psychopathic lawyer impressed even the most uptight of critics.

In a career that has spanned over three decades now, there is much more to Johnny Depp than this list. IMDB tells me that there are interesting films coming up. Maybe it is tome to get those hopes up a little bit.