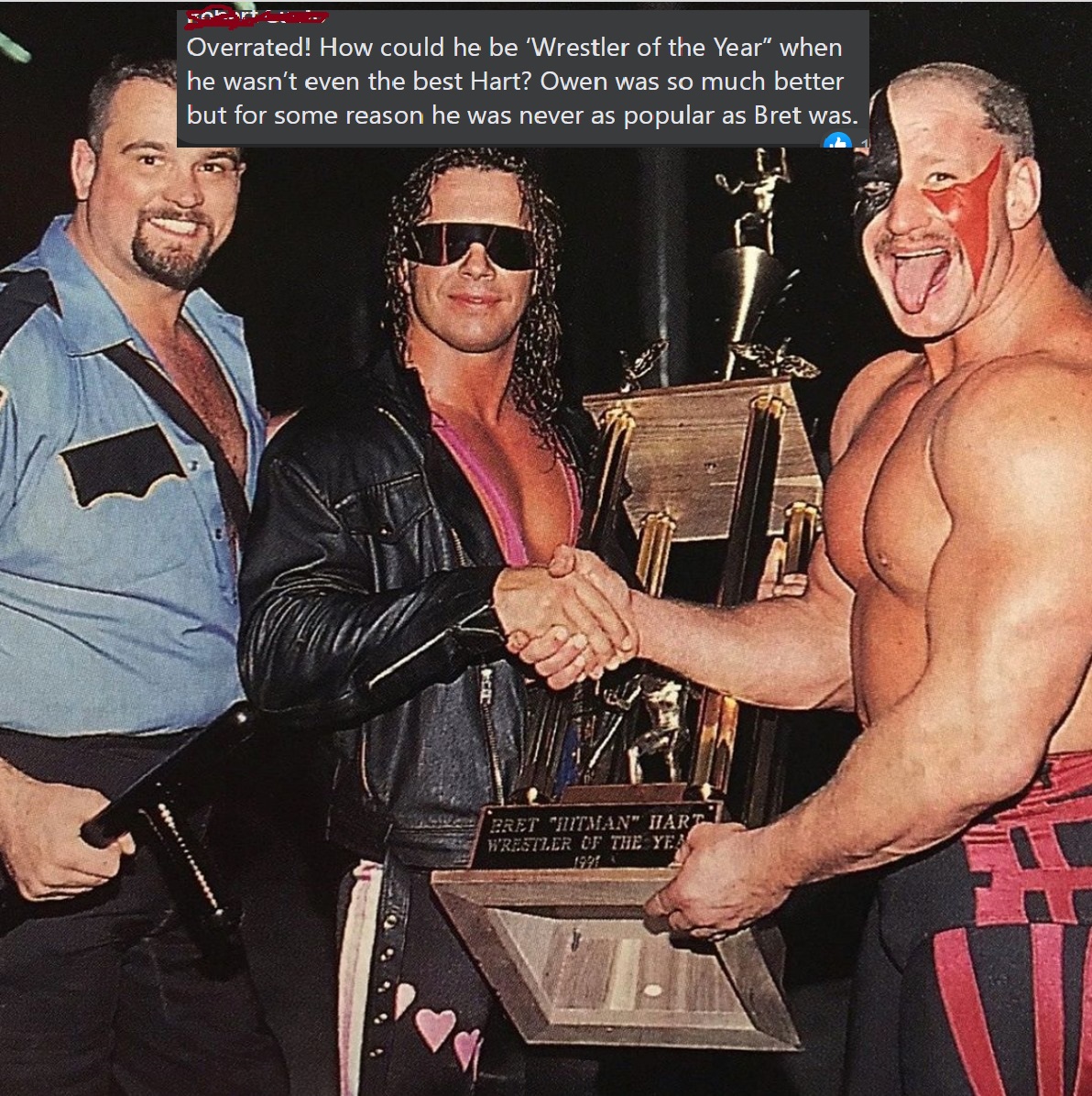 I was just killing time scrolling through my Facebook timeline the other day when I saw this wonderful picture of Bret The Hitman Hart getting a trophy from the WWE legends Big Boss Man and Legion of Doom’s Hawk back in 1991.

Then, like an average Facebook user that I am, I headed over to the comment section to check out what the fans had to say or add to the picture; may be someone was there on PPV or caught it live on television, or to catch any anecdotes of a seasoned wrestling lover. Apparently, I expected a tad too much from social media.

Over the years, that one we have discovered is that social media is a hub for hate as much as it’s a hub for socializing online and meeting old buddies. That’s what happened with this picture. I found an individual who finds Bret The Hitman Hart overrated, I debated with him on the comment section, and then took screenshots of our debate which you can find down the page.

First things first, everybody has an opinion and the right to express it. So this person with whom I had a long conversation is clearly not a Bret Hart fan. And he was upset about Bret getting the trophy for wrestler of the year, which is funny.

Now, Bret Hart won this wrestler of the year award in 1991, when he was the best wrestler in the WWF by a landslide, certainly miles ahead of the then-superstars and flag bearers like Hulk Hogan and Ultimate Warrior. So, I don’t know what this guy is upset about!

He was rather confident and sure of himself expressing his displeasure with Bret Hart winning the award. But the more I read, the more I felt he was either coming from a place of ignorance or his criticism was unjust and based in no data. I had to respond.

Before you lose patience, let’s just dive right into the conversation.

I shall not reveal the name of the individual I had this debate with. For the purposes of this post, let’s call him Anonymous.

Here are comments by Anonymous that started it all

Anonymous: “Overrated! How could he be ‘Wrestler of the Year” when he wasn’t even the best Hart? Owen was so much better but for some reason he was never as popular as Bret was.”

“Bret wasn’t over either. He never drew as champion. It’s funny how WWE started to win the Monday Night Wars immediately after Bret left WWE for WCW.”

Me: “Bret was the reason that people were coming to watch WWF at all at the time – drug scandals, sexual harassment charges, Vince’s other legal cases, etc. gave a major beating to the WWF brand.”

“If it wasn’t for a serious, no gimmicky storyteller like Bret Hart, WWF would have finished.” I added

“As for the resurgence, do Google how Hart vs Austin and the Montreal screwjob was singlehandedly responsible for that and the attitude era that followed.”

Anonymous responds to my response

Anonymous, “Do you think it’s any coincidence that the balance of power shifted during the Monday Night Wars after Bret left WWE for WCW? He never drew any money. Vince was going through some financial struggles and decided that he couldn’t honor Bret’s albatross of a contract anymore.”

“Things got so bad that they started removing the water coolers from WWE HQ. If Bischoff had half a brain, he would’ve left Bret in WWE. That would’ve been the final nail on their coffin. Instead he gave Vince some financial relief by taking Bret of his hands. WWE’s popularity went through the roof shortly after they took the belt off Bret. “

Me: “You neither read my comment nor do you have the prior knowledge and enough data on much from back in the day.”

Anonymous: “I read your comment and have prior knowledge from back in the day.”

He keeps hating on Bret, I keep on enlightening him

Me: “So, Bret The Hitman Hart’s match at Wrestemania 13 and Montreal Screwjob don’t mean anything to you. Because you believe in a supernatural theory that ratings went up as soon Bret Hart was out. What about the time between 1990 to 1997 December when he wasn’t the champ, which is 7 years minus 500 days. Where were the ratings?”

“Again, Wrestlemania 13 gave birth to the Stone Cold Steve Austin mania. Montreal Screwjob gave birth to the evil Vince McMahon character. These 2 were what got the ratings back from WCW to WWF, instead of a supernatural occurrence.”

Anonymous: “Yes, the Montreal Screw Job gave birth to Mr. McMahon’s character, but that was all Vince’s doing. I don’t think anyone saw that coming. Vince himself thought that fans would see him as the sympathetic character. Stone Cold Steve Austin vs Bret Hart was a great match. There’s no denying that. But Steve Austin’s Star was rising. It would’ve happened with or without Bret.”

Me: “Even if that were the case, it still doesn’t lend credence to the theory that ratings went up because he was gone.”

“As for being a poor draw, even Stone Cold couldn’t have drawn in the face of all that was going on till 1995. He was a champion on mic. What you rather needed in that tumultuous period for WWE was a champion performer in the ring who could get the wrestling fans, who stopped believing in WWF, to root for that one guy who makes them believe all’s not evil with WWF. If we accept that WWF was drawing bad with Bret Hart at the top, we got to accept that WWF would have been finished without him.”

Spread the love
Tags: A Debate with a Bret Hart Hater, Bret The Hitman Hart is Overrated, Why was Bret Hitman Hart a bad draw