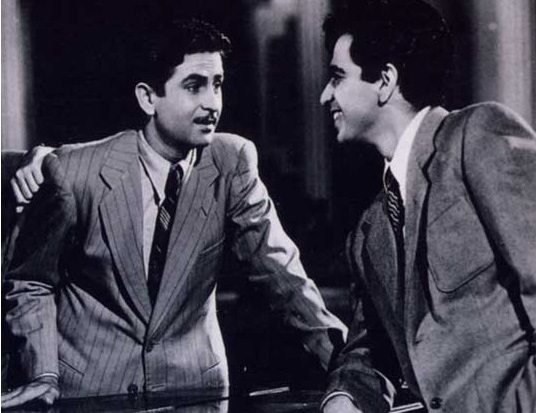 People close to Raj Kapoor and Dilip Kumar have maintained that the two legends were hardly the rivals they were made out to be in the media. Yes, the competitiveness existed, but only professionally. But as rivalries go, nobody likes to confess out in the open.

Watch 5 of the best Raj Kapoor Performances and Films

In this post, we try to demystify the equation between Raj Kapoor and Dilip Kumar – the two biggest legends and masterful artists of world cinema – and whether they really saw each other as adversaries or whether underneath that fierce competitive rivalry existed a bond of friendship.

Raj Kapoor and Dilip Kumar were Friends from School

What might come as a surprise to most is that Raj Kapoor and Dilip Kumar were friends from their school days. What’s even more interesting is that Raj and Dilip kept egging each other on to take up films. Raj believed that Dilip had the looks to be a quintessential Hindi Film hero, and Dilip was sure Raj’s good looks and his father’s super status in the theater arena were reasons valid enough for him to try his luck out in films .

Let’s Just Glide Over their Friendship.  For Media (and us), they were Fierce Rivals, and their Professional Adversary was One for the Books

It won’t be justified to compare the two actors in regards to their acting skills and styles, simply for the fact that Dilip Kumar was more of an actor of theatrics sensibilities whereas Raj Kapoor believed in a more restrained style of acting (barring his Chaplinsque roles). He believed in expressing his character in a manner that would seem more natural, even if that isn’t making him look suave and dashing – he still ended up looking that, but blame those “neeli ankhein’ and that awwdorable dimple!

Dilip Kumar went no holds barred with this emotions – holding back wasn’t his strong suit anyway, and that’s what made him so popular, so connective.

They were the blue-eyed boys of Hindi cinema back in the days they signed Mehboob Khan’s Andaz – far from the superstars they went on to become in the years to come. Giving them company was another to-be-superstar, Nargis. Together, this trio weaved magic on screen. Personally, I’am not a fan of Nargis’ performance in Andaz, but Raj and Dilip surely set the screen on fire every time they faced off – be it an oblivious Raj rubbing salt on the wounds of lover boy Dilip, or the angry Raj actually beating Dilip’s head to pulp. Mehboob Khan made sure there were plenty of moments to savor.

In the scenes where Raj Kapoor was firing brimstones of sarcasm at Nargis, he managed to one up Dilip Kumar for the sheer authenticity and pain he brought to the screen. His dialogue delivery was soaked in naturalism and intensity, and those were the moments you were left with once the end-credits rolled. Dilip Kumar played the part of the arguably Bollywood’s first ever friend-zoned hero showing just the right amount of pain and seething intensity.

Andaz is perhaps the biggest casting coup of all times, and it sure is worth all the hype that comes along.

For Sangam that came out in 1964, Dilip Kumar was approached for the role that eventually went to Rajendra Kumar. It doesn’t disappoint me as much, since by the time Sangam came out, both Raj and Dilip, had started to look jaded. The charm that floored their legions of fans up until late 1950s had started to wane off. Also, simply for the fact that Sangam seemed to be an extension of Andaz, for a very similar plot, we wouldn’t have wanted to Andaz’s memories to be diluted.

The 50s – When the Rivalry Bloomed

Cinema lovers had no premonition what was coming their way. This was a cinematically rich decade, made richer by the joyous rivalry of its two greatest artists. Thanks to Devanand, there was a third dimension to the rivalry as well. Gurudutt was another star who was carving his own path, but much of the focus was on the rising stars, Raj Kapoor and Dilip Kumar.

Dilip Kumar and Raj Kapoor kept upping the ante in what seemed to be a fierce battle to the top. While Dilip Kumar managed to get hold of the Filmfare trophy more often than Kapoor, the latter’s films received more recognition across the film festivals, and the audience at these festivals couldn’t help but feel overwhelmingly charmed by the blue-eyed star from India.

Raj Kapoor’s films like Awara and Shree 420 took him beyond borders. Back home, he was making huge ripples as a director, which sort of was at odds with his popularity as an actor – and still is. You can hear people from the industry wax eloquent about his directorial mettle, but his abilities acting skills are hardly touched upon.

Why the Comparison is Sometimes Unfair

The uncanny similarity between the titles wasn’t a coincidence, or so we want to believe. This was a clear-eyed tactic to pitch the superstar right against each other for a face-off.

My dad keps recounting how back in those days everybody was talking about the two movies and who’s gonna outshine the other. There were typical fan-conversations that were steeped in masala and there was a lot that happened in imagination.

Meanwhile the box office numbers of both the films got a great push by the hype, in the awards circle, Raj Kapoor one-upped Dilip Kumar by grabbing the big prize of Best Actor at Filmfare.

While Dilip Kumar worked in some of the greatest romantic films of all times like Mughle Amaz, Devdas, Madhumati, Raj Kapoor portrayed himself as a more grounded middle class man, fighting against the ills of the system, fishitng against the odds that his character was crumbled by and much to out delight, crushing thode odds to the ground as he emerged to be the voice of the class he represented.

So, while both these actors were the biggest box office drawers, they represented two different dimensions of cinema – while staying within the contours of commercial cinema. It apparently is a little unreasonable to compare the romantic hero, Dilip Kumar, with a hero for the cause, Raj Kapoor.

And that’s where our focus for the rest of the article is going to be. Dilip told raj your father is such a huge personality in theatre, why don’t you…

In Phir Subha Hogi, Raj Kapoor has given one of the greatest performances ever, and not just in Indian cinema. If I were to compare it to a more recent acting performances, I’ll equate it with Joaquin Phoenix’s performance in Joker.

There have been rivalries in Hindi cinema to follow this one, but none have had such arythmical charge. But incomparable as they were to Raj-Dilip rivalry, they were fascinating nonetheless.

There is much more to explore in Raj Kapoor vs Dilip Kumar rivalry. Watch this space.