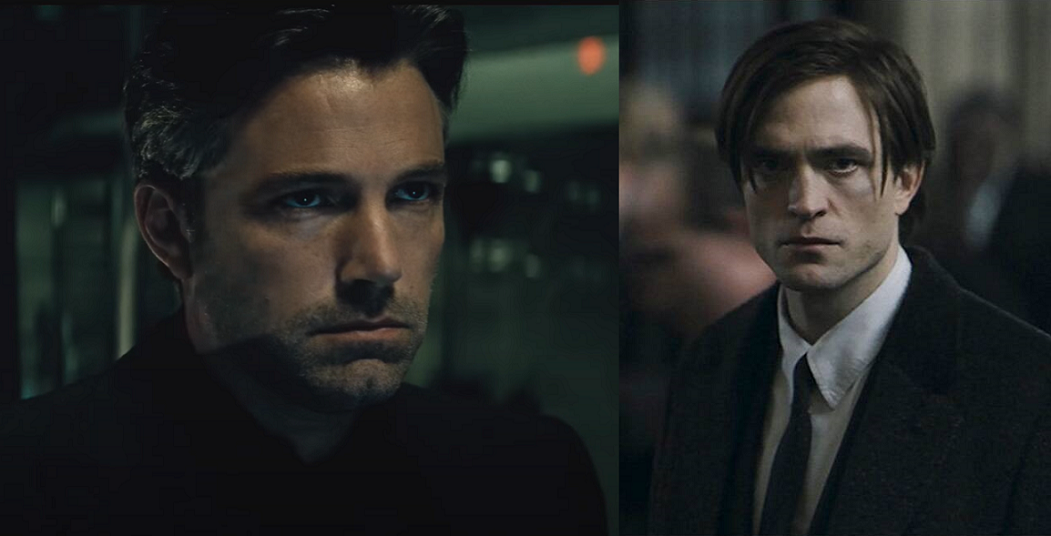 Things have been brewing up rather strangely in the DC Universe from quite a while now – and, not for all good reasons.

However, it seems like Batman and Bruce Wayne fans have something to look forward to in the upcoming year 2021 as the trailers for the Robert Pattinson starrer and Matt Reeves directorial The Batman as well as for the Snyder Cut of Justice League, with probably an improved and serious Bruce Wayne/Batman essayed by Ben Affleck, dropped at the Fanome event last week.

Just look at the picture above and tell us it doesn’t get you excited? Both shots of Ben Affleck and Robert Pattinson as Bruce Wayne look slick – the former is how we got introduced to Affleck’s version of Wayne/ Batman in the 2016 hit and hated Batman v Superman – Dawn of Justice, directed by Zack Snyder. We call that Batfleck.

So, if you have to go just by this one shot of both actors, who do you like more? Who do you think is better as Batman or Bruce Wayne between Ben Affleck and Robert Pattinson?

What is the hype about Ben Affleck returning as Dark Knight

Just to refresh your memories…

Ben Affleck was cast as Batman/Bruce Wayne for the first time in the 2016 smash hit and controversial Batman V Superman. I say smash hit because it did earn big at the box office despite having been thrashed by nearly all critics – except for the very lovely Peter Travers.

Arguably, BvS turned out to be the most polarizing film of our times – dividing critics and fans like no other movie has before.

Critics were hurt and upset by how human both Superman and Batman were made in the film by deconstructing them, apart from the fact that it was a really dark film.

If you want to know ‘Dark’, go back and watch The Dark Knight (2008). BvS doesn’t hold a candle to the 2008 Batman film – starring Christian Bale and Heath Ledger and helmed by Christopher Nolan – when it comes to the intense, disturbing and depressing theme.

The Dark Knight affects you like BvS doesn’t even come close to. So, I frankly didn’t get what critics were yapping about.

Besides, what a dim reason to not like a film! Even Hans Zimmer had pretty harsh words to say about BvS for the same reason. I haven’t been able to wrap my head around all the cribbing to this date.

Moving on, the blue collared men over at Warner Brothers gave in to the views of critics and ignored those of the fans. This was apparent by how miserably goofy the Justice League (2017) turned out to be – reducing Batman to a comic relief.

Thank god for that!

Personally, I had a great time watching the theatrical cut of Zack Snyder’s Batman V Superman. I thought it was entertaining for the most part. Sure, things did take a weird turn in the last 20 minutes after Doomsday showed up, but that did not kill of my overall experience.

But, even the biggest of fans would tell you there were holes the size of Godzilla. The theatrical cut of BvS was full of plot points and contrivances that just didn’t add up.

Why did the world think Superman killed all those villagers in Africa in the opening sequence when they were clearly killed off by bullets?

How did Superman NOT detect the bomb in the wheelchair in that Congressional hearing that killed so many?

What was the role of Kahina – the African woman – in Superman being called in for those Congressional hearings? Where did she go afterwards?

MOST IMPORTANT OF ALL….

What makes Superman not trust Batman at all? Why just he can’t let him fight criminals in his own little Gotham? Why does that clash with Superman’s idea of justice?

I’m sure I’ve forgotten a very crucial hole; it has been 4 years.

Every single question or criticism the movie faced on its theatrical release was answered and every loophole was found to be non existent in the 30 minutes extra that The Ultimate Edition showed us.

Be it why the world believed Superman killed them despite the bullet shots, why did Superman not detect the bomb and many more. I really do not want to include spoilers here.

That makes you realize that making Justice League goofy and chirpy wasn’t the first fuc*ed up thing that Warner Brothers did. They actually picked off extremely important plot points and scenes from the Snyder Cut of BvS and removed them to make the film look plain stupid.

Talking of Snyder Cut, oh well, there is the re-release of Justice League on HBO Max awaiting us in 2021. And then you will have Ben Affleck appearing as Batman again in The Flash. As it turns out, there will also be Michael Keaton reprising his role as The Batman.

What a cool thing to be part of the universe with multiple Batmans.

Here’s What Critic Reviews Said About The Justice League: Yay or Meh?