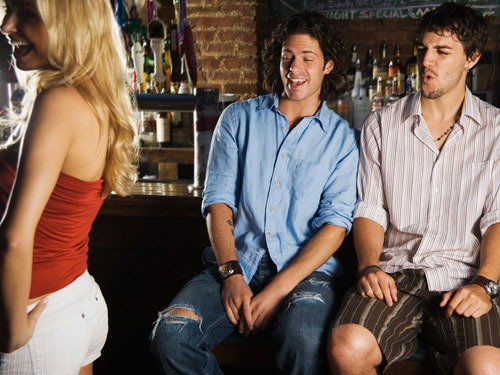 The Bad Guy. Is it true that women find bad guys sexier? Is it true that nice guys finish last? Why are we like our movies – we only talk about extremely bad or extremely good? Nothing in between. As far as I’m concerned, there’s nothing sexier than a good guy who has just the right amount of wrong in him. But the tricky part is, it should be finely calibrated. Else, it can go so awry. Take Drinking for instance. Girls often chat about how cute and romantic it is to see the men they love, lose control over a drinking binge. But only, occasionally. That drunken sext once in a while or that 3 ‘o clock drunk-dialing just to say you’re missing her – that’s pretty sexy. But gentlemen, do realize, keep it rare. Repeat it two or three nights in a row, and you’re most likely to be bad news. And what was considered sexy then, is now considered a nuisance.

Flirting is another. Every girl likes her guy to be popular with her girlfriends. In fact, its nice to know that the object of your affections is popular with your friends too. A compliment here…a casual remark there…is okay. Try and make sure you do it in in the earshot of your girlfriend. So she knows where your loyalties lie. But be warned, don’t overdo it. Don’t for instance, ask her girlfriend out for  coffee the next day – even if you meant it to be just a harmless coffee! Just saying. You don’t want to be the topic of conversation at the next girlie brunch – about how men are such fickle creatures! Every man’s dream, every woman’s nightmare. Even as we crib, most of us girls like it that our men are typical blokes and spend their afternoons with the guys watching the Big Game and drinking beer. It’s a comfortable feeling to know that your man is being a man. So spending an afternoon with your buddies, endlessly agonizing on your team’s chances in the match, seems strangely endearing for us. That’s the right amount of wrong, in our book. However, take it beyond a night to last an entire day or two. Or a week. And you’re probably on your way to being alone, anyway.

Who doesn’t like a guy who can make you blush with his rakish actions? Who doesn’t like a man who can do the things you’ve fantasized about but never done? And who doesn’t like a man who can make you feel all woman?  Telling her that she always turns you on…doing it when she least expects it is wow…surprising her with a new move is super…but here’s the caveat. Don’t be a dog. In the sense, don’t get Pavlovian about it. Don’t constantly talk dirty…talk about how hot she is…tell her things that make her feel less of a woman, more of a slut. And yes, do try and be monogamous about your passions. End lesson: Don’t make her feel like a sex object. Else, she is going to object.

The Don’t-Care Attitude. Very attractive, definitely. For a society where we’ve all been brought up with rules, breaking them feels very delicious, very sinful. So yes, it’s nice to meet a man who will tell his colleagues that he won’t bother coming back to office because he’s done for the day! We all love a man who has the balls to defy the convention and show his attitude, especially when it comes to winning us over. But there’s a thin line between attitude and rudeness. When you tell off a waiter just because the water was not cold enough, it’s not attitude. It’s uncouth. When you speak rudely to your colleagues or folks over the phone, that’s not cool. It’s plain rude. And most importantly: when you swear all the time, without rhyme or reason, that’s not ‘i’m-being-me-attitude’, it’s just showing you were badly brought up. Spread the love
Tags: cute guys flirting, every girl likes her guy, Every woman's nightmare, girlfriend out for coffee, what drives women crazy, Why Women Like Bad Boys, women are complicated