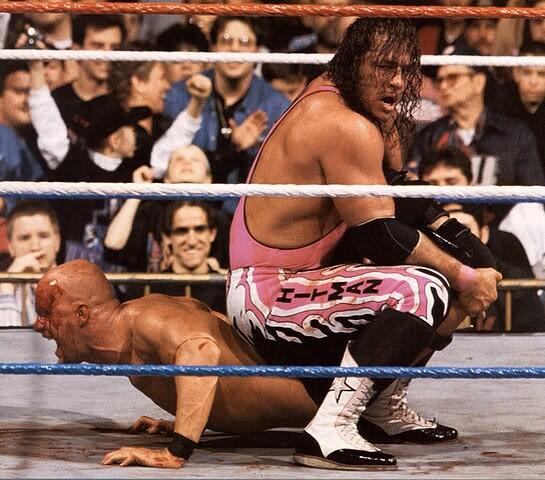 The Excellence of Execution, Bret ‘The Hitman’ Hart, has stepped in the ring and wrestled matches of epic proportions way too many more times than the other – mostly blah – WWE superstars.

While his in-ring mastery and technical superiority has a whole literature dedicated to them, what made Bret Hart even more lethal was the beating he could take.

Among the most resilient of stars to have ever graced the WWE ring, Bret Hart not always kept the freakery in check. Some of his matches were wild, and while he thrashed his opponents good, he also showed that he could take more blows than anyone else in the business.

Here are 7 of the most gruelling Bret Hart matches that threatened to go off the rails, and did:

Bret Hart Vs British Bulldog at In Your House ‘96

It’s not one of those matches that comes up in discussions very often, but if you just sit down to watching this one, it won’t let you off the hook. Not for a second.

I can’t recall any other match when Hitman looked like such bloody, pulpy mess. Before or since. Not to mention, this is one of Bret Hart’s very best matches.

Vicious – that’s what Bret ‘The Hitman’ Hart was in his fight to win the WWF Championship for the third time. Diesel stayed true to his monstrosity and thrashed Hitman left, right and centre. That landing on the commentator’s table must have hurt! Diesel couldn’t believe how Hitman could come back from that to pin him down. Nor could we. Probably the best match of Kevin Nash’s career.

One of the classiest matches ever, the Bret Hart vs Austin at Survivor Series 96 may not have the lunacy of their WrestleMania 13 fight, but it was technically superior and almost equally see-saw.

Making a comeback after 6 months, Bret Hart did take time to catch up, and you couldn’t expect the rattle Snake to show any mercy all this while. Bret kicked out of the Stone Cold Stunner!

The two gut-champs fought against all odds in a match that nobody gave a chance to. As much as everyone was lured by the WWF Championship match between Hart and Michaels, one hour sounded a tad too long. But that was only till the bell set the match on.

The Pink and Black attack truly shone this night. Albeit he had already been a World Championship once before this, but King of the Ring of 1993 was homecoming for the champion wrestler.

It did not make up for the chance snub he got from Hulk Hogan who didn’t want to pass the belt to him, but it surely got his fan-base to grow manifolds.

Bret Hart Vs The Undertaker at One Night Only

Bret Hart vs Undertaker happened many times in the ring, but none of those fights had the same rhythmic charge as this one.

The Dead Man was made to limp, to scrap, to fight for his life in a match that trumped any great match these two warriors had against each other before – and there were many.

The mother of all brawls, the Bret Hart vs Stone Cold Wrestlemania 13 match turned out to be a hair-raiser. Whilst it was Stone Cold Steve Austin in that bloody mess at the end of the mayhem, but Bret Hart took some serious blows to his body throughout –Stone Cold ramming the steel chair on Bret Hart’s back twice stand out.