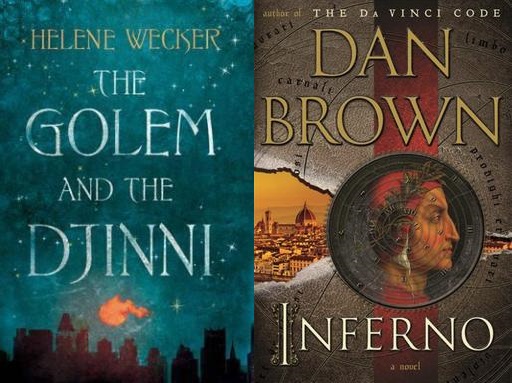 While some revisit the legends’ roots to go homage to homage, melancholy to melancholy, there are books that offer rebooted stories and opaquely murky plots, striding ahead at a warp speed.

Here are the 2013’s best books, written to give us long-lasting and leisurely jolts of pleasure.

> And the Mountains Echoed by Khaled Hosseini Authored by the Afghan-American writer, “And the Mountains Echoed” has got rave reviews across the globe and the literature lovers have lapped it up with keen desires. The book, which begins with an Afghan folklore, essentially is about people who discover themselves and delves deep into a psyche of a family.

The story at times is based in Greek island of Tinos, and then it stretches far back to Paris and San Francisco. The connoisseur of crime novels and mind twisters, Dan Brown has come up with his latest piece, “Inferno”. To begin with, the cover sucks you in totally. The story has been received well by critics and readers alike, and Brown is said to have taken giant strides upwards from his last debacle, The Lost symbol. Buy this one to witness Robert Langdon solve another of his world-historical mysteries.

> The Golem and the Jinni by Helene Wecker

A remarkable debut by Helene Wecker, “The Golem and the Jinni” perches itself one of the top spots in the ‘best books of 2013’ listing. It tells the story set around an immigration society of New York City. It takes place in the year 1899 and its two characters – Golem and Jinni – are essentially supernatural beings which shape this story characterized by perceptible digressions and long-lasting deliberations.

> 12th of Never by James Patterson Here is an uplifting reminder that murder mysteries are alive, and very much kicking.  The twelfth instalment of the James Patterson’s Women’s Murder Club series, “12th of Never”. Some might accuse this series of paper-thin characterizations, but the stories have always taken hold of the reader, and not letting them go.  The story begins by Dr. Perry Judd having a nightmare about a brutal murder. He recounts the entire details for the cops, only to realize that the murder actually takes place the very next day. And thus the reins are handed over to the Homicide investigators Lindsay Boxer and her partner, Rich Conklin in order to crack the mystery. It is a warts and all autobiography chronicles the incredible life of Phil Robertson. The book delivers the kind of exotically perched story of the man who is known as the original Duck Commander and Duck Dynasty star. It tracks his life from early childhood through the founding of a family business and more How could he not be in this list! How could be not in any list! Sobriquets like ‘king of horror’ don’t hold a candle to King’s assured manipulative prowess. Undiminished by time, his oldest novels still manage to bring out the lily-livered soul in us. “Doctor Sleep” starts with where “The Shining” left. The now grown up Dan still hung on to his “shining” abilities. But this time round, he has run into Abra, a girl with freakingly better skills at “shining”. The story unfolds while the two begin communicating through a spiritual connection

Plot, execution, characters – everything leaps. Buy one or more of these as you find yourself flipping chapters insatiably.

Latest posts by Rohit Raina (see all)
Spread the love

Why Should You Consider Safety Benefits Of Wearing Knee Pads?

Why Is the Keto Diet so Popular?

What to Do with Unused Gift Cards