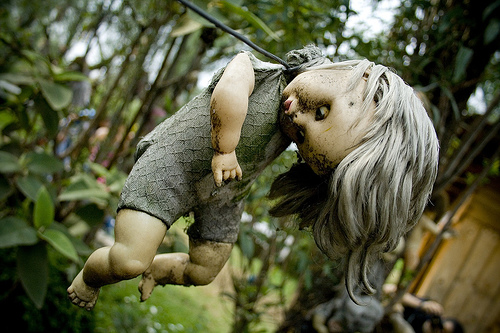 Planet earth is filled with tourist attractions. But not every tourist attraction is meant to charm. They sure may overwhelm you with their wholesomeness and awe-inducing oddity, but those are not the places you would recommend to your friends and family. Rather, these are the spots you head to when you want to get a kick out of some weirdness and when every world you wish to utter is polled around Ohthatwassofuckingincredible.

This list is about those very places. With a denatured assault on your senses, they are meant to suit the crazy sensibilities of souls who get a hard-on for anything that’s bizarre. Though, it would be unfair to label their tastes as ‘bizarre’. May be you are bored of watching all those beautiful landscapes, may be it’s time to be a little unboxy and head for a vacation to a place that’s different and downright wacky.

Here is the places that should be convincing enough to get you out of your slumber and set off on a peculiar journey:

Here is one for a dose of wackiness: A glimpse into some amazingly sized prehistoric creatures spread over a massive area of 11 hectares.

Located in the city of Pyongyang, the International Friendship Exhibition Hall, hosts a massive range of close to one lakh gifts that have fascinated the lieks of Soviet prime ministers Gregory Malenkov and Nikolai Bulganin, Palestinian leader Yasser Arafat, Cuba’s Fidel Castro and few others. The ones that are most popular include the silver chopsticks that belong to Mongolia, a gold cigarette case chess boards which belong to Colonel Qaddafi and also an alligator (which you see in the picture above) that offers drinks from a wooden tray sent all the way from Nicaragua.

If you get an impression that it has to do something with some kind of horror legend, you aren’t exactly off the mark. It is said that Julián Santana Barrera used to collect these discarded dolls, but it wasn’t out of any hobby. Rather, his purpose was to pacify the restlessly roaming spirit of a girl who had dies of drowning in the river. When you are sauntering down the canals of Xochimico, these creepy dolls stare right at you. To make it creepier, Barrera also died the same way as that girl.

No need of time machine, there you are. No, this is not a museum These theme park located in Gifu administrative district brings back the memories of the great battle of Sekigahara by recreating it in the physical space. And this park goes beyond a monstrous monument. It is filled with the life size structures that can be seen indulged in sword fight, hand combats and more. Rituals of the era are also depicted and you can see representation of the beheaded warriors being carried away. And then, to plug you right into the warfare, there is a title song, Ah, that pays incessantly.

Now, this is not your average location to host any ossuary, but, be as it may, the Karner Bone House brings to the ears of those who have stepped into this uncanny place the melodies that are as uncanny as the place itself. And on this date, you can find a huge array of painted skulls. Well, there wasn’t enough space and the graves had to be recycled.

So, for all those bored souls who are scrambling to find a place that offers more than picturesque landscape and gives you reasons abundant to keep your camera rolling for making a boast that you captured something the likes of which aren’t seen (and heard) very often, you got your options.