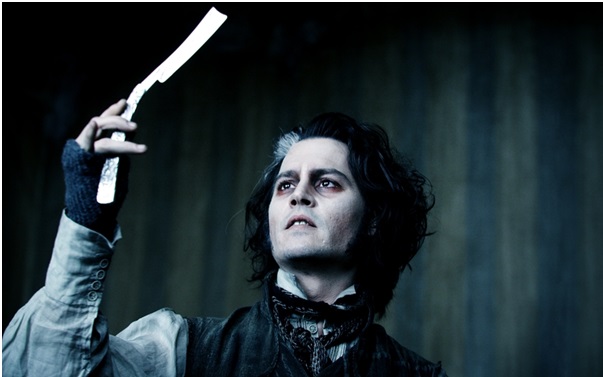 The Warped characters that Johnny Depp has played in abundance throughout his career have been instrumental in perching him at a space where he is all by himself. There aren’t many actors in Hollywood who would dare play the range that Depp has played and manage to look convincing in almost every one of them. While he has a number of hits where his characters have looked suave and charming (aka Donnie Brasco), there is a greater number of roles where he played a character unburdened by sanity (Dark Shadows, Edward Scissorhands, etc.)

The following list however is about 3 such characters that that lie somewhere between the two extremes and cater perfectly to entertainment and humor. He doesn’t look like the James Barrie of Finding Neverland in them, but you aren’t reminded of the hideous-looking Tonto from The Lone Ranger either:

Sweeney Todd: The Demon Barber of the Fleet Street Oh, didn’t he slay you by his cruel, bloody charm! Benjamin Barker led a happier, saner life with his wife and child before he was framed and sent to jail by our villain. Benjamin Barker returned to live rest of his life (which lasted not more than 1.35 hours) as Sweeney Todd. Depp looked dapper even in those clothes belonging to a man who hardly cares#d what he’s wearing. The man is consumed in revenge and Judge Turpin’s blood is all he sees from thereon. Tim Burton is credited for giving Depp some of the oddest and finest roles of his career. Sweeney Todd stands as one of the very best amongst that list.

But it was that white shock that run long along his hair that did us in. Add to that his shockingly good vocals and we got our buck’s worth. The movie was snubbed at Oscars but Academy recognized Depp’s brilliance and awarded him a nomination in the Best Actor in a Leading Role category. Ironically, Depp hasn’t offered something watchable since Sweeney Todd Playing the character of Raoul Duke, Johnny appeared in a fashion he has never appeared – before or since. We saw a completely bald Johnny Depp, who is drowned in mescaline and other drugs, going completely off the rails. The movie sank without a trace, but over the period of time, it has achieved some status. Depp’s performance was particularly praised.

It was a lazily exhausting performance by Depp who seemed to be in fine form throughout the length of the movie. And he did manage to make ‘bald’ look cool for a while. In certain parts of the world where Hollywood is not that popular and most of the movies from the industry are dubbed in the local language, Depp is not known beyond Pirates of Caribbean. These people haven’t seen Depp beneath those layers of makeup. And Ed Wood happens to be even lesser known gems of Depp.

Even though he did not have all kind of bizarre things on his face and head, he somehow managed to look crazy and demented, at least in some scenes. What was with the golden locks? Did they want to stay true to the character? It was biopic after all. Not everyone liked the blonde Johnny Depp as he played a drug dealer making truckloads of money doing it. While he may not have looked bizarre, his fans and anti-fans hoped to never see him blonde ever again. Playing a drunk man, Johnny Depp fit seamlessly into the role of a 17th century poet. And boy, those locks! While the movie faced some flak from the critics, its attention to detail and remaining true to the period it was set in was widely appreciated. Depp looked awesomely inebriated for most part of the movie, and we didn’t complain. Not even a bit.

But not everyone hated it. Some appreciated this much diversified look and gushed about how he looked so good and so different. But that was before they saw Pirates of Caribbean, Dark Shadows, Chocolate Factory and Lone Ranger.

Sobriquets like ‘versatile’ don’t hold a candle to Johnny Depp’s range. And going by his penchant for bizarre, he is least likely to stop experimenting.