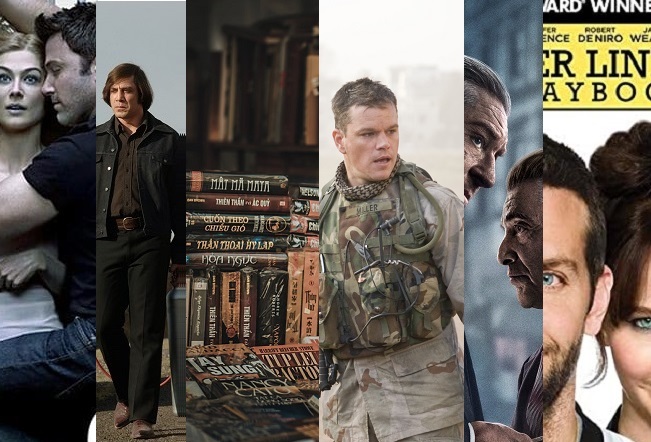 If the fundamentals are in place, the adaptation of a great book to a movie can guide you to the mountaintop of your cinephilic pleasures – hyperbolic but true. If you’re a bibliophile, though, you’ll only go as far as feeling relieved they didn’t ef it up.

I’ve always been wary of films based on books, even more so when it comes to movies based on non-fiction. Every liberty the filmmaker takes to make the film interesting crushes the authenticity of the story as the line between fact and fiction blurs.

Fictional books also suffer this onslaught quite too often when they end up getting made into terrible movies by rather terrific directors. The Dan Brown series, anyone? Each Ron Howard movie based on those books is worse than the previous one – which is a shame considering what a talented and interesting filmmaker Ron Howard is.

There also are books that do not get a lot of love from readers but end up being made into very compelling films. Bibliophiles may thrash them on Goodreads but cinephiles wax eloquent on IMDB for turning an unremarkable book into an instant classic.

The list we are presenting to you may or may not be about books turned into movie classics – that’s for you to decide – but rest assured, you won’t regret your Netflix/Prime time spent watching them.

Published in 2006, Imperial Life in the Emerald City: Inside Iraq’s Green Zone was picked off the shelf by a very eager audience wanting to know what’s really going on with the insurgency and the America’s rebuilding of Iraq, as they like to call it. For the fact that it came out in the Bush era when America’s Iraq policy was unrelenting and pulling back of the forces was not in sight, the curiosity for this book ran high. The movie, however, took its own sweet time to come out in 2010. By the time Paul Greengrass took it upon himself to adapt the book into a movie, America was planning to pull back from Iraq.

By 2010, the Obama administration had realized the the US dominance over the region was coming undone. But even before that, Obama had expressed his reluctance to continue the active hegemony of US in the Middle East. All of this left some impact on the box office numbers of the movie.

As for how true an adaptation it was and whether it was a compelling piece of work, Green Zone, starring Matt Damon in the lead role, was gripping from start to end, with its almost fiction-like tension and confrontations.

While it’s rated 6.8 by IMDB users, the Metascore of 63 (a very impressive score considering it’s a consolidation of the rating by critics) convinced me to give it a go. It was a great call.

Gone Girl the movie should easily rank among the very best of book to movie adaptions ever. The psychological thriller written by Gillian Flynn was given a roaring remake-for-screen by the genius that David Fincher is.

I hadn’t read the book, to be honest. So when I went to watch the film with my girlfriend, we developed serious doubts about marriage. There is not a more anti-marriage movie than Gone Girl, even if that isn’t the point it’s trying to drive home. While we weathered this onslaught and are happily married now, this Ben Affleck starrer still gives me the creeps. Rosamund Pike unsettled my mind with her incendiary performance.

No Country for Old Men by Cormac McCarthy, Adapted by Coen Brothers

A great book requires a great filmmaker to do it justice when made into a motion film, so goes the cliche. And when you have Ethan Coen and Joel Coen of the Coen Brothers at the helm, you can take for granted that justice will be served.

Cormac McCarthy stitched up a page-turner with wonderfully written characters and a story line that’s about to explode at any moment. The Coen Brothers keep the slow-burn elements while walking the tight rope of perfection when balancing comedy with a harrowing, tension-filled narrative.

If its fundamentals are in place, a Romcom can be endearing, charming and transcendent in its appeal. But then again, Silver Linings Playbook is not your average romcom even when it is.

David O. Russel was an unlikely director to pick this book up and adapt into a movie, considering his filmography that’s studded with films such as The Fighter, Three Kings, and so on. But adapt he did.

If I have to dumb down my feelings, I’d say this – Silver Linings Playbook is a romantic comedy that can be watched and enjoyed by all genders and age groups. If there was ever a thing as a chick flick, this blast of an entertainer is not one. While the movie may have a false note or two, the performances by Bradley Cooper, Jennifer Lawrence, and Robert De Niro don’t.

I Heard You Paint Houses by Charles Brandt, Adapted by Martin Scorcese

The Irishman is still hot property on Netflix and for a good reason. Martin Scorsese had to wait for nearly a decade to make this enthralling book into his least flashy mob film that’s even-tempered and nerve-wracking in equal measures.

The only thing missing from the resume of arguably the greatest filmmaker of all times was a movie that ends in melancholy. With The Irishman, Scorsese takes Goodfellas, makes it into a five-part miniseries, and then throws in the Before and After (long after) storylines for effects.

The other thing that he does different is that he makes the whole thing look even better.

What are you going to check out then?

Now might be a good idea to check out either the book or the movie that you haven’t had the chance for yet.

The Leaked Conversations of Steven Rosenblum