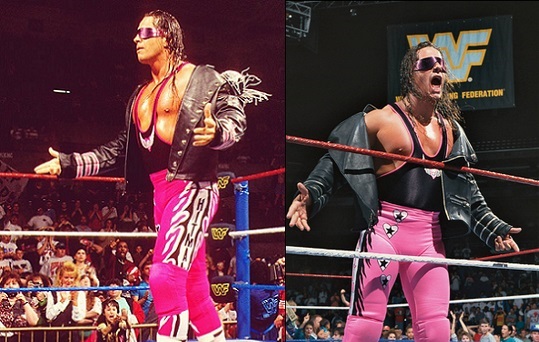 Every single time Bret Hart made his way to the WWE ring, it was both – an elegy and a mission statement. The Hitman music sent the fans in a delirious high as the Pink and Black invaded the arena. And then those ritual observances – giving away shades to a young kid in the crowd, doing his thing in the ring in that suave leather jacket and pink tights, swinging his hands at the audience – this went on right till he landed the first punch. As a lifestyle blog for 20 somethings, this is another tribute to the great Hitman.

Hart’s gunmetal slickness was in perfect sync with his fluidity in the ring, and that’s what kept the business alive during its most troubled phase in the early 90s. A man who never once cut a corner in his career, Bret Hart was the main event, and thus the loudest ovations of the night were reserved for him.

Below are some such occasions when Bret ‘The Hitman’ Hart fans truly brought the house down:

WWF Superstars Hoisting Bret Hart Over their Shoulders at Wrestlemania 10

Bret Hart hoisted on the shoulder of other top babyfaces of WWF is etched in the memory of pretty much every fan and non-fan. It may not have been that heart-pumping battle, but Bret did get the better of the “invincible” Yokozuna in their title clash at Wrestlemania 10. Pandemonium triggered. The top stars, right from Randy Savage to Tatanka, from Lex Luger to Razor Ramon, came out to show their appreciation for the tireless champion. Meanwhile, the crowd just kept getting full on ecstatic.

Every time Bret Hart made a comeback from a hiatus, the ovation shook the whole arena. And Madison Square Garden, on Nov 17th, 1996, was o different as hysterical fans screamed their guts out to welcome their champ back to the ring after over six months. Hart made sure everyone almost choked in anticipation as the music kept on playing and he took all the time to step into the arena. And as his Pink and Black figure emerged from the shadows, the roof had already burst off from MSG.

Not only did we get to see The Hitman in action after a long break, he was squaring off against the one and the only Stone Cold Steve Austin. The bout triggered what is unarguably one of the greatest WWE rivalries of all time.

Bret Hart Vs Hakushi at In Your House ’95

It was a beast of a match. Bret had really come into his own in 1995. He drove his fans through-the-woods berserk, and whenever his music came swooping in, you knew the atmosphere would be electric and the the match to follow would be worthwhile. So as he made his way to the ring to fight Hakushi, Bret got a great response from the crowd that really set things up beautifully. The match, meanwhile, had sure rhythms and served as a bona fide tribute to the art that wrestling is. Both men, master of their kills, went style to style, homage to homage.

Bret Hart’s Entrance in the Match Against Jimmy Del Ray

Well, it was a non-event really, but the euphoria is unmistakable. You could see a girl hardly able to contain herself, jumping and screaming like crazy as Bret Hart put in his trademark sharpshooter on Del Ray in a match that barely lasted 4 minutes.

Oh this was loud! While this may not be a legit entry out here, but I just can’t leave out the almost-comeback by Bret in 2005 in Montreal. Credit must go to Shawn Michaels who got the Montreal real excited by scratching the Screwjob scars. So while he kept on going about how he would love to screw Bret Hart one more time (“I screwed you once, I’ll screw you again!), the unfathomable happens. The Hitman music starts playing in a WWE arena after no less than 8 years and gets the crowd euphoric… only to be told it was just a joke. So while Bret Hart does not show up, Montreal hates Michael even more.

Alright, this is not an event per se and you won’t see fans going nuts, but this video certainly gives you a glimpse into how The Hitman had replaced the Hulkster as the new-generation hero.

WWF decided to have some Santa-que fun on Bret Hart’s successful defense against Shawn Michaels at Survivor Series ’92, and the crowd, already delirious in Bret Hart’s victory, joined in with all the glee and gusto. It was pandemonium.

Ovation After Intercontinental Title Match with Mr. Perfect at Summerslam ’91

The Crowd, which had its midst the Hart family, went ballistic as they saw their chap get his first major title in singles in WWF after slogging for 7 years since his debut. For their Hero, it was vindication, a reward for all the hours he put in the dungeon and for putting up wit all the shit that Vince McMahon made him do.

Entrance at One Night Only ’97 Encounter Against Undertaker

Received with hostility in USA but adored elsewhere, Bret Hart got a huge pop at the NEC Arena in Birmingham, England when he came out to defend his WC title against The Undertaker. It was a huge stadium, filled with wolf whistles for both, Bret hart and Undertaker. Did the match live up? Well, it was by a considerable wingspan their best match together. Hitman and Dead Man truly turned the heat on that only one night!

WWE customarily goes for the world tours to connect with their offshore fans, and this time it was Spain. The Hitman canon well and truly struck Barcelona, as was evident from the resounding response he got as soon as the The Hitman music started reverberating. The match was a beauty and unsurprisingly made its way to The Hitman DVD.

Hell froze over and pigs started flying when Bret Hart made a comeback that wasn’t meant to be. Not seen in WWE arena for 12 years after the 1997 fallout, we’d almost thought he is forgotten. Vince McMahon had other plans though. While the following year was pretty dull, 4 January, 2010 alone was worth the price of admission.

For a Hitman fan, these ovations will make the heart sing. I’m pretty certain you can recall many more. The subtle emotional pull will delight your waking hours.