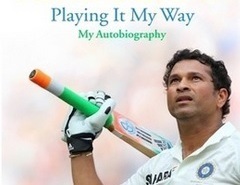 Finally, Sachin speaks up. So accustomed are we to hear only the always-politically-correct Sachin, these 10 excerpts coming straight from him shock and delight us:

1) “No one from the BCCI managed to call me or inform me of my removal as captain before someone from the media called to say I was no longer captain. I felt extremely humiliated to hear this.”

2.) “I told myself that the BCCI mandarins might be able to take the captaincy away from me, but no one could do the same as far as my own cricket was concerned.”

3) “I want to state very clearly that the (Monkey Gate) incident arose because Andrew Symonds had been continually trying to provoke Bhajji (Harbhajan Singh) and it was inevitable that the two would have an altercation at some point.”

4) “I still believe that the (Monkey Gate) matter would not have been blown so out of proportion if (Ricky) Ponting had discussed it with the captain Anil Kumble, Harbhajan and the Indian team management before reporting the incident to Mike Procter, the match referee.”

5) “Kapil Dev’s method (as India coach) of involvement and his thought process was limited to leaving the running of the team to the captain, and hence he did not involve himself in strategic discussions that would help us on the field.”

6) “Just months before the World Cup, (then India coach) Greg Chappell had come to see me at home and, to my dismay, suggested that I should take over the captaincy from Rahul Dravid.”

7) “I hated losing and as captain of the team I felt responsible for the string of miserable performances. More worryingly, I did not know how I could turn it around, as I was already trying my absolute best.”

8) “It (losing) was hurting me badly and it took me a long time to come to terms with these failures. I even contemplated moving away from the sport completely, as it seemed nothing was going my way.”

9) “Mind you, there is little doubt in my mind that we would have drawn (Sydney Test of 2008) had it not been for what seemed to us to be mistakes by the umpires and some rather unsportsmanlike conduct by a few of the Australian players.”

10) Unarguably the best: Ian Chappell in 2007, had written in a column that Tendulkar should look at the mirror and ask himself if he was good enough to continue playing cricket.� Tendulkar responds: “I showed him the size of the mirror in 2008 when we toured Australia (Sachin was man of the series in the VB Series) He should have realised that the man he is asking to stand in front of the mirrior has played more cricket than him”