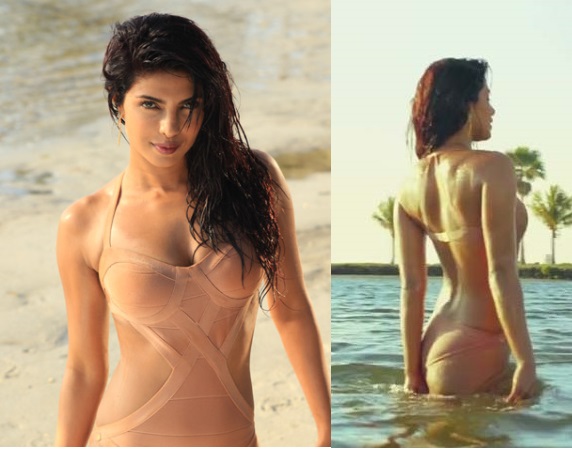 You know that rare feeling, when you are scrolling through the morning newspaper, and something stupefyingly unfunny comes up and batters all the common sense into the ground.

As 2013 bids adieu, I take you through a roundup of some mind numbingly silly antics and not-so-cherishable events that did their bit to make 2013 a year to so-not remember:

Vivek, seriously? So, now you been having wet dreams of fans comparing your performance in Krrish 3 to that of Heath Ledger as Joker in The Dark Knight.

It was a silly statement from a smart man who isn’t smart enough to realize it’s silly.

Granted, it was a spoof-like thing, but we want our spoofs funny, witty; rather than being downright ugly.  And what’s with those weirdly pointed nipples.

And one though music was about striking the right notes. For you, apparently, music is all about striking the right booty-shakes. Priyanka, we adore you as an actress, we really do. You were the lone ingenuine spot in an otherwise duplicated version of Charlie Chaplin’s classics. And there have been dashes of brilliance in your earlier films. So, let’s not get all that ambitious and spread our wings in a place which has no room for us.

Dude, what’s wrong with you? Just when one thought Bigg Boss and Salman Khan are made for each other, you have been indulging in a blatant exhibition of unadulterated bias. Is Arman and Tanisha’s filmly-family connection all that there is to your unfair and unrelenting favoritism?

Besides, what’s with cooking up your own stories around the feedback from outside? Please stop passing on your prejudices as our feedback. You were the best thing on TV between November and January, for god’s sake. Return to sanity!

And before you say it, I ain’t a part of Kushal’s PR machinery.

Much to the relief of bonafide cinema lovers, Sajid Khan finally has a flop in his kitty. It’s already a pain to see great directors who act like arrogant dicks. But when someone so unburdened by talent talks of himself as such a cocksure tour de force of a filmmaker, we take serious offence.

Here is the most quoted statement of the year “Poverty is just a state of mind”. One notorious party, one young bloke, and a spirit so juvenile that it makes us wonder what his deal really is.

Watching Tanisha in Bigg Boss hurts! I am no feminist, but it is a sordid story unfolding to see a woman being treated like the way Tanisha is, happily letting a chauvinist humiliate her. So much for the sake of a dignified woman (Good lord, they have seriously screwed up the definition of ‘dignified’ in their heads)

You might have played cricket for 24 years, a staggering figure by any yardstick, but your decision to retire still begs the question, WHY such a hurry!

Judge us and call us star-struck Cricket fans who don’t have a real love for the game of Cricket, but Cricket without Tendulkar looks so bland (for lack of a better word). What’s anyways so special about a man running in to throw a ball and the man with a willow at the other end using all his power to dispatch it out of the ground (apparently, that’s what the T-20 has reduced the game to)

India still hasn’t come to grips with the fact that the word, “Former’ now prefixes the term ‘Cricketer Sachin Tendulkar’. The Kohlis of the world might be busy scoring centuries, that poetry, however, is lost!

So, that were the celebrities (barring the last name) who are willing to trade respect and consistency for stray publicity thrills and the cringe-worthy oddball charm.